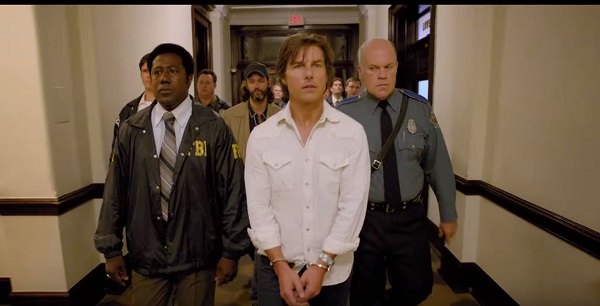 American Made is based on the story of one man,  a pilot named Barry Seal, using his kills to help the C.I.A, the Medellin drug cartel, the D.E.A, and the White House during the late 70’s and early 80’s.

When the story catches up to Barry Seal (Tom Cruise) he’s already a pilot for TWA (Trans World Airlines) in the late 1970’s. One day, Barry is approached by C.I.A agent Monty Schafer (Domhnall  Gleeson) and asked to fly a plane over South America and take photos.

After a few successful trips, Barry’s low-flying antics catch the attention of drug cartels in Columbia. It’s not long before Barry finds himself running drugs for the Medellin Cartel,  guns to the Contras, and bringing Contras to the U.S for training. Barry is literally making more money than he knows what to do with. But like any house of cards, Barry’s entire operation starts to crumble faster than it was built.

The performances in the film are what you’d expect from actors like Tom Cruise, Domhnall Gleeson), and even Get Out’s Caleb Landry Jones who plays JB. Cruise is such a great actor that he’s able to play a convincing Barry Seal despite looking nothing like him and not really nailing the accent. Domhnall Gleeson is good as a smug CIA spook that literally appears out of nowhere in scenes and disappears like he was never there.

Caleb Landry Jones may have taken the torch from Paul Dano as the guy who’s definitely up to no good whenever he shows up onscreen. Jones isn’t in the film for long, but has a strong 20 minutes and brings a nervous energy to Barry’s journey. Before JB shows up, Barry is  on a cocaine fueled fun riden – JB shows up and reminds the audience that these situations usually don’t end well.

The best thing director Doug Liman (Edge of Tomorrow) and writer Gary Spinelli did was structuring the film in a way that’s honest and doesn’t sugarcoat the U.S’s involvement in the War on Drugs what that drug money was used for. The film effortlessly infuses actual footage of George Bush, Ronald and Nancy Reagan, and even Oliver North gets a cameo.

Another smart thing was keeping the danger the cartels present in the background until the end. Leading up to the final act, all that’s shown is a lot of cocaine, money, guns, but no real violence from the cartels. Even the scene when the compound is raided by police is played with comical touch. It’s not until the final act that the curtain is pulled back slightly and your reminded just how dangerous these groups can be.

There are different Tom Cruises: There’s Action Tom Cruise, Fun Tom Cruise, and Academy Award Tom Cruise. American Made is peak Fun Tom Cruise. The subject matter is serious and the consequences for everyone involved are even more serious. Yet, Tom is having a blast the entire time. He’s so good at having fun, the film never shows Barry Seal being completely stressed out – and he should be. It makes for an enjoyable 2hrs of Tom Cruise running drugs and having a good time.