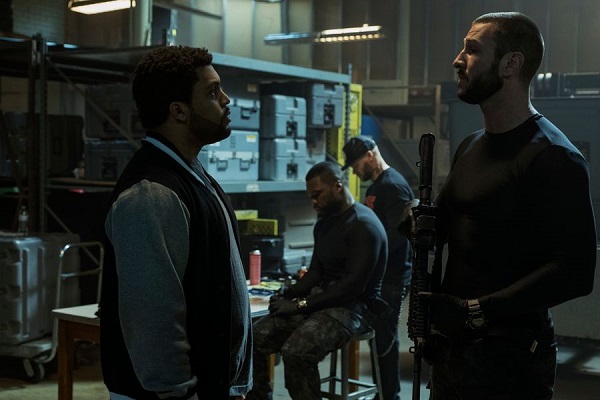 Den of Thieves is a familiar gritty action thriller – an elite police unit that uses “nontraditional” means to solve cases are up against a group of highly skilled criminals who are attempting to pull off an impossible heist.

The elite police are the LA County Sheriff’s Major Crimes Unit, lead by “Big Nick” (Gerard Butler). They’re up against a group of bank robbers lead by Merrimen (American God’s Pablo Shreiber). Their crew also includes Levi (Curtis “50 Cent” Jackson) and Donnie (O’Shea Jackson Jr.), the newest member of the crew. The impossible heist the crew is trying to pull off – stealing $30 million from the Los Angeles Federal Reserve Bank.

The plot is as straightforward as heist movies can get. There are two hours of get-to-know the good guys and bad guys, plus some cat and mouse games that lead up to the big heist at the end. There’s also a few shootouts, plot twists, and the obligatory strip club scene.

Big Nick and his major crimes crew are reckless. They show more drugs, hookers, and violence used by the cops than the criminals. It’s a plot device used  to show the criminals and cops are two sides of the same coin. This is a trope action thrillers love to use, especially with the rise of anti heroes.

Even with the fun action scenes, the real star of the film is Gerard Butler as Big Nick – the unhinged, borderline psychopath cop. Nick is a terrible human being and Butler is having all of the fun playing him. When Nick’s introduced he looks like his hangover has a hangover and he eats a donuts left behind at a crime scene. To be fair, the film could’ve been 20 minutes shorter, but audiences would miss just how crazy Butler’s performance is. There’s a scene when Nick walks in on a double date unannounced. It’s absolutely unnecessary scene that adds nothing to the plot, yet it has a hilarious payoff at the end of the scene when he asks for a hug after acting like a maniac.

The other great character is Donnie played O’Shea Jackson Jr. He’s the only one in the crew that’s allowed to be funny and have some character depth. O’Shea shows a lot of range and does a lot with his supporting role. Audiences knew he could do the drama and the comedy and this shows he can do action well. My hopes for O’Shea to play the new Batman are still alive.

The action is done well from the shootouts to the heist. None of the heist scenes do anything new but they manage to be very entertaining, especially for fans of over-the-top shootouts. Even though the final showdown will remind audiences of recent heist films,  Director Christian Gudegast does a great job of making those scenes feel familiar but not like carbon copies of previous films.

Den of Thieves is a heist film packed full of every characters trope and action trope imaginable. What saves the story is that its done very well. It’s the kind of ridiculous entertainment that’s highlights familiarity and fun and hides its flaws underneath.  There’s a twist at the end that will leave audiences smiling and should make for a fun second watch as you look for clues you may have missed.