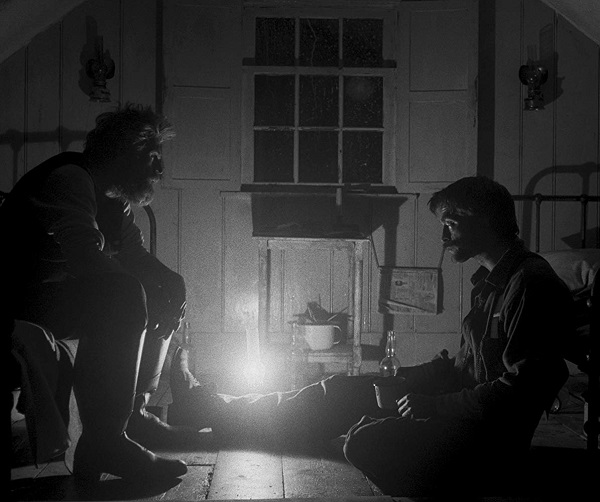 Director Robert Eggers thrilled audiences in 2015 with his breakout film The Witch – a mesmerizing horror film set in 1630. Eggers highly anticipated follow-up, The Lighthouse, is a different kind of horror.

Set in the 1800s, the story follows Ephraim (Robert Pattinson) and Thomas (Willem Dafoe) – two lighthouse keepers working on a remote island for four weeks. Their working relationship starts rocky as Thomas delegates work to Ephraim. The relationship becomes more strained as isolation and claustrophobia start to creep in.

What is or isn’t happening on the island and in the lighthouse is up for interpretation. Is it really happening or characters seeing things? Thomas’ monologues and inconsistent stories about his life only lead to more questions about what’s happening.

Shown in black and white with a 1.19:1 aspect ratio (imagine a big square in the middle of the screen), The Lighthouse makes you feel the same claustrophobia the main characters are experiencing. Eggers uses his skills as a director to pull audiences into this world and it makes you feel as boxed in as his aspect ratio.

Pattinson and Dafoe are great but Dafoe steals the show as Thomas. Dafoe is as bizarre as he is hilarious. From his tobacco smoke, secrecy about the lighthouse, flatulence, and his general disgust for anything Ephraim is talking about, he’s everything you’d want in a character stuck in a lighthouse. Dafoe gives Thomas the right about of nastiness and overbearing boss attitude to make his character believable.

The Lighthouse could easily be a stage play. The two leads are what make this story work. Watching two men slowly descend into madness isn’t always enjoyable, yet the trio of Eggers, Pattison, and Dafoe make it work.

Eggers’ made an artsy film, and there isn’t a better way to describe it. It’s visually stunning film that’s supported by two great performances. The Lighthouse is made for a particular audience that loves these types of films. It’s the kind of movie that can go in 100 different directions and isn’t handcuffed by a traditional three act story structure.