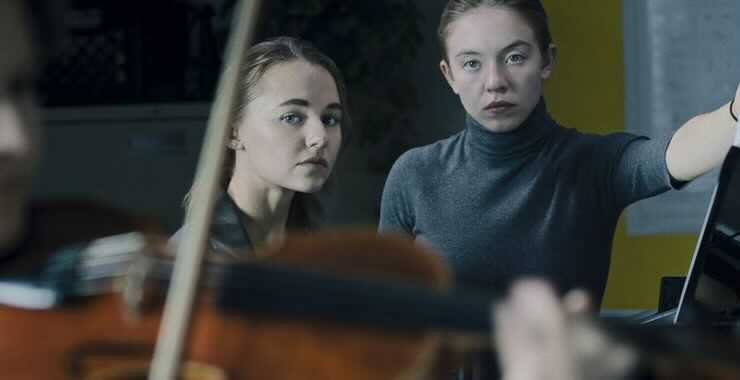 This leads to Juliet finding a notebook left behind by a previous student that committed suicide. It’s not long before Juliet realizes the drawings in the notebook are allowing her to play the piano at a high level. For all of Juliet’s success, as in most horror movies, she learns there’s a price to pay for everything.

As cool as the mystical notebook is, the film is at its best when it’s a drama about a hyper competitive musical school and a battle between two sisters. The horror element is fine but doesn’t seem to add much to the story. A film about students willing to do whatever to be great has a lot of layers to it without having a magical notebook attached to it. The competitive back-and-forth between Juliet and Vivian is much more engaging than Juliet flipping through a notebook of scribbles playing the piano really well.

The film’s best scene isn’t even a scary one. One of Juliet’s music teachers gives her a speech about the great musicians and where they were at her age. It’s a chilling speech that’s mean to cut Juliet deep and it does its job. Nocturne could’ve used more of those moments to keep the story interesting.

Even with the film lacking in horror intensity, Sweeney is great. She does a fantastic job as the sister willing to risk it all for greatness and also as a young girl that’s in way over her head and doesn’t realize it until it’s too late. If this film shows anything, it’s that Sweeney has a career in horror thrillers if she wants it.

Nocturne may be a below average horror movie but it is an above average film with good performances and enough intensity to keep audiences interesting. The horror elements distract from the more interesting story about sisters and the internal and external pressures that come when you strive for greatness. This film may not feed your horror movie appetite but it will keep you entertained.