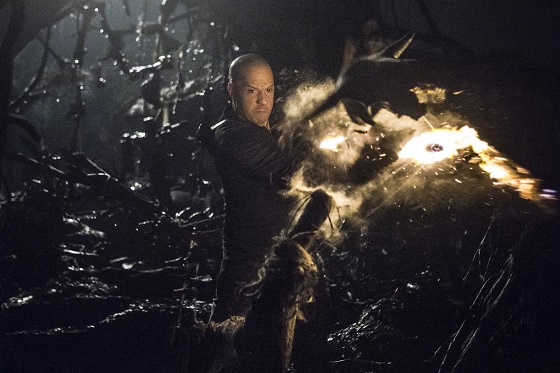 The Last Witch Hunter’s title is self explanatory. Diesel stars as an immortal witch hunter named Kaulder. Who Kaulder is or where he comes from is unknown. Through numerous Gladiator style flashbacks, it’s obvious he had a wife and daughter at some point.  The story starts with Kaulder and his group, who look like a bunch of guys doing a Lord of the Rings cosplay, hunting the Witch Queen (Julie Engelbrecht). During the battle, Kaudler kills the Witch Queen, but is cursed with immortality in the process. He’s destined to walk the earth alone for eternity.

In present day, Kaulder’s spent the last 800 years hunting witches and keeping order on earth. That’s a big job for one person. He’s basically the Santa Claus of witch-hunting. Not to mention, the witch hunting business must pay well. Kaulder dropped the Hobbit look andlives in a nice New York City loft, drives a luxury car, and wears some very expensive looking suits. Kaulder can best be described as 80% Dominic Toretto, 10% Van Helsing, and 10% Wolverine. Honestly, he might be 85% Toretto because of his car.

After the mysterious death of Kaulder’s friend and guardian, Father Dolan (played by a criminally underused Michael Caine), Kaulder learns his death wasn’t an accident. With the help of the new Dolan (Elijah Wood) and an unlikely ally, a witch named Chloe (Rose Leslie), Kaulder does what he does best – hunt the people responsible for the death of Father Dolan.

During the citywide search, Kaudler and his crew learn of a much more sinister plot taking place in New York – a group of evil witches plan to resurrect the Witch Queen, and release a black plague upon the earth.

Anyone buying a ticket for a movie called The Last Witch Hunter starring Vin Diesel knows what they’re singing up for. The film is as ridiculous as it sounds, if not more. How ridiculous:

All ridiculousness aside, the film’s biggest issue is the action not being above average and the story not being goofy enough. The film isn’t extreme on either end. It could’ve been over the top action like Diesel’s Fast movies or over-the-top silly like Nic Cage’s Drive Angry. If you’re going to have a film where Vin Diesel swings a flaming sword, go all the way with the goofiness and give audiences something to enjoy. Instead, the film focuses on trying to be a serious action movie and that falls as flat as Kaulder’s “Salem was wrong” line.

The Last Witch Hunter is a mediocre action movie that’s really a 106 minute Hail Mary to try and create the next action movie franchise. The final 10 minutes could’ve easily had Kaulder winking and “sequel set-up” watermarked across the screen. The movie would’ve probably been best served as a television show to tell a longer version of Kaulder’s story. Think Highlander with a lot more witches and fast cars. If there’s one thing The Last Witch Hunter teaches, it’s that Vin Diesel isn’t as much fun outside of the Fast movies. But if Fast 8 is Dom and his group battling witches, I’d buy a ticket right now.