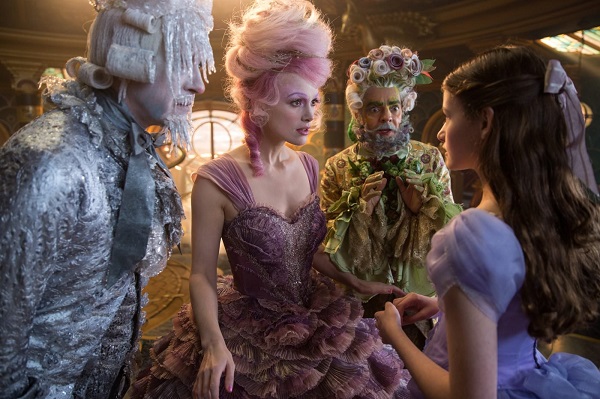 In this version of the Nutcracker tale, Clara (Mackenzie Foy) is given a gift from her deceased mother – an egg shaped case that’s locked. Clara and her family travel to Drosselmeyer’s (Morgan Freeman) house for a Great Gatsby style holiday party. When Drosselmeyer gives out gifts to the children, Clara’s string leads her to the magical land of four realms where the key to her mother’s gift is. It’s not long before her key is stolen by a mischievous mouse. This leads Clara to Captain Hoffman aka The Nutcracker (Jayden Fowora-Knight), the protector of three realms.

Nutcracker and The Four Realms feels like a knock-off version of The Lion The Witch and The Wardrobe, a much better film that did everything this movie tries but did it better.  Clara’s journey to the realms and the “you’re the one” Neo vibes are unoriginal and uninteresting. The story doesn’t try to do anything interesting with the characters or the realms. The film borrows from other films – the ballroom dance scene is reminiscent of Beauty and the Beast, the two bumbling guards are like the cops in Wreck-it Ralph, and the watchful owl is from Clash of the Titans. Morgan Freeman with his eye patch might as well be Nick Fury.

The story doesn’t do anything interesting with Clara, its main character. Why her mother thought she was interesting and whatever made her special is never explored. Not to mention, Clara never reacts to all the craziness swirling around her when she visits The Four Realms. Everything about the character and her interactions feels muted.

The lack of parental supervision is jarring. Drosselmeyer sending Clara to a dangerous land with no supervision is even more alarming. None of these adults care what happens to children because they routinely send them on dangerous missions.

The most interesting scene is Misty Copeland as The Ballet Princess. She does a beautiful ballet performance that explains The Four Realms and the conflict with Mother Ginger (Helen Mirren). The story could’ve used a lot more out of the box storytelling to stop it from feeling like a flat retread of every child fantasy movie over the past 10 years.

The Nutcracker and The Four Realms is entertaining for kids and will get people in the mood for Christmas.  For all of its colorfulness and crazy characters, the expansion of the classic Nutcracker story is just a bad clone of other kid’s fantasy movies.