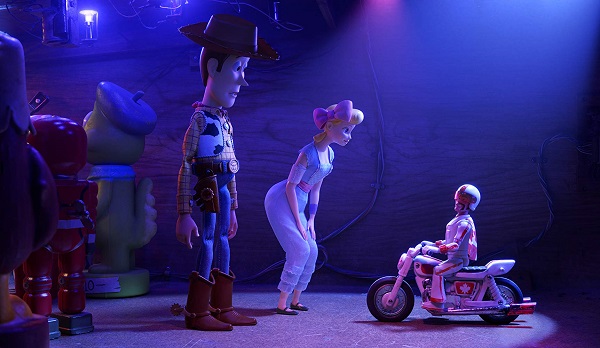 Nine years after millions of adults sobbed watching Andy give his toys away, Woody, Buzz, and the gang are back in Toy Story 4 – the fourth chapter in the Toy Story franchise

Bonnie (Madeline McGraw) is the owner of Andy’s old toys, leaving Woody (Tom Hanks) having to adjust to his new role. When Bonnie comes back from kindergarten orientation, she made a new toy out of a spork and named him Forky (Tony Hale).

Forky is dealing with the transition from being trash, to being a toy. Forky keeps throwing himself into the nearest trash can, only to be rescued by Woody time-after-time.  Very quickly, Forky becomes Bonnie’s favorite toy. Bonnie and her family go on a road trip and Forky jumps from the RV. Knowing how important Forky is, Woody jumps too in attempt to find him and return to the RV before Bonnie wakes up.

A star studded ensemble cast can feel very crowded. Luckily, Toy Story 4 focuses its sights on Woody and his maturation as a character. It opens with Woody trying to find his place in Bonnie’s world. His journey continues as he attempts to explain to Forky what it means to be a favorite toy. Woody’s journey takes another leap as he tries his to find exactly where he fits in now that Andy is gone.

Because of the focus on Woody and the new characters, Buzz and the rest of the toys take a backseat. The new characters are great and add new energy and laughs to help this installment feel different from the previous films. Duke Kaboom is a hilarious addition to the franchise. He’s the “Canuck with all the luck” that can seem to do a stunt correctly. Ducky and Bunny are another fantastic addition and deliver the film’s funniest moments, plus a great post credit scene.

Most people believed the Toy Story franchise had a satisfying ending in Toy Story 3. It seemed improbable that after nine years the franchise could recapture the magic that made Toy Story 3 so special. Well, Toy Story 4 found a way to do it. Director Josh Cooley captures the humor, action, and emotional beats that make the Toy Story films stand out. There are moments that are so comical, it’s hard to hear the next joke because the theater explodes in laughter. There’s also moments that are so deeply emotional; you forget you’re watching animated toys trying to navigate their lives.

One of the best sequences, that sum up the franchise, takes place during the third act when Woody and his pals are trying to get Forky from the antique store. The action, humor, and unexpected emotional twist is everything moviegoers have grown to love and appreciate about Toy Story.

The Toy Story franchise has always succeeded at creating a world that toys lived in, but felt real. With every adventure, the films bring audience into this world that’s familiar but also feels new with the introduction of new characters and increasingly wacky predicaments. The story succeeds by having Woody as it’s centerpiece. He’s the perfect POV for the story that’s told.  Toy Story 4 continues the tradition of spectacular animated films packed with more humor and heart than most films. Sign me up for Toy Story 5.