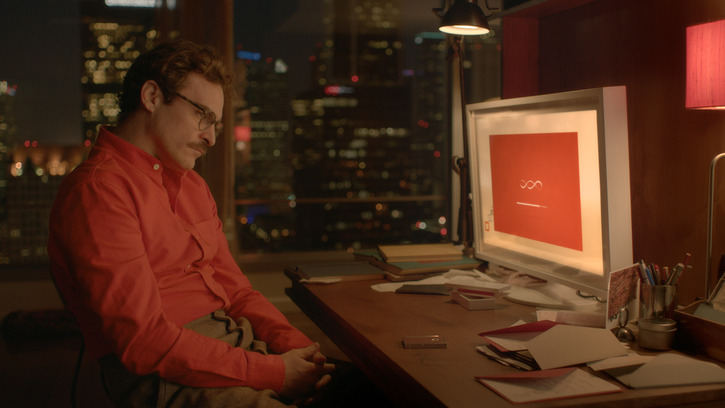 Cinematic visionary Spike Jonze returns to the big screen with Her, an unconventional love story about a man and his machine.

Set in the near future, Theodore Twombly (Joaquin Phoenix) is a writer who lives a melancholy existence due to a recent separation from his wife (played by The Girl with the Dragon Tattoo’s Rooney Mara). After purchasing a new operating system (think an advanced version of Siri) named Samantha, and voiced by Scarlett Johansson, he starts to feel alive again. Samantha’s sense of humor, inquisitive mind, and sensual voice meet all of Theodore’s needs. ALL of them.

As Samantha’s understanding of the world grows, their relationship grows from her being his personal assistant to an intimate boyfriend/girlfriend relationship. Theodore takes his device everywhere allowing them to take walks in the park and even go on double dates like any couple would. The two also engage in an awkward three-way sexual experience that includes a surrogate (played by Portia Doubleday).

As Theodore and Samantha’s unorthodox relationship grows so do the desires in their relationship.

Her is more than a quirky sci-fi love story; it’s a film about relationships and the people (or things) we connect to. Although Samantha’s not physically present, she’s still able to provide emotional intimacy to Theodore. He’s more connected to her than the other people in his life

In addition to having the built in awkwardness of a man falling in love with his operation system, Her adds some social commentary about our cultures attachment to their devices and the social media relationships we have with people we never meet. The film also questions our ideas about love and what constitutes a relationship. The commentary doesn’t beat you over the head; Spike Jonze uses some well placed humor and smartly written dialogue to get his points across.

Joaquin Phoenix’s talent as a gifted actor is on full display. He’s done amazing work over the years and this may be his best performance to date. He inhabits the character of Theodore from his unsettling phone sex conversations to the heartbreaking realization of his divorce. I was impressed with how Phoenix handled being onscreen solo for most of the film, and even more impressed with how little you notice.

Her is undoubtedly one of this year’s best films. It will make you think about how close we are to someone falling in love with their device, or are we there already.