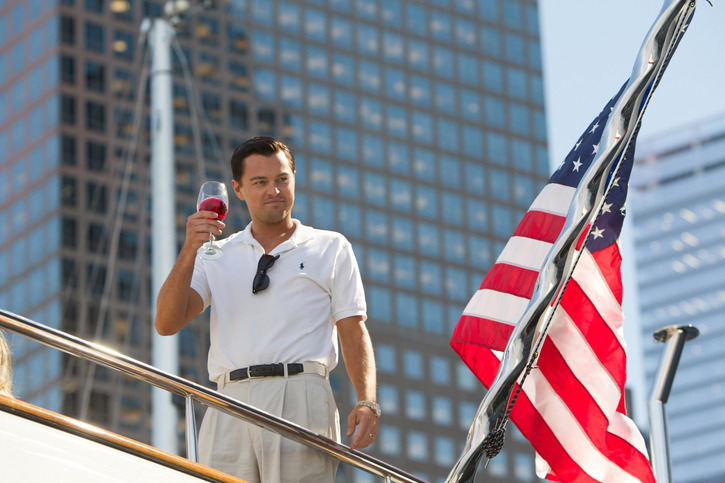 The Wolf of Wall Street opens with Jordan Belfort (Leonardo DiCaprio) telling the audience how – at the height of his powers – insane his life was. There’s drugs, sex, nudity, language, and more drugs before you can get settled in your seat. Martin Scorsese’s letting everyone know this won’t be a number crunching drama like 2011’s Margin Call. Wolf was going to put you in the front seat of Belfort’s drug induced roller-coaster life that took him from a brokerage trainee to a wealthy stockbroker.

Based on Belfort’s 2007 novel, Wolf tells a story that’s almost too crazy to believe. When Belfort loses his job after ‘Black Monday’, he works for a small brokerage company where he learns there’s value in trading worthless penny stocks. Belfort pulls together some of the best salesmen he knows to help sell useless stock to the richest 1% of the population. The small firm’s improbable rise leads to more corrupt business practices along with an insane office environment. There’s midget tossing, strippers, and the place is overrun with prostitution and drug use. Their offices run more like a frat house with unlimited finances than one of Wall St’s biggest brokerage firms.

Belfort’s reputation and shady business practices draw the attention of the federal government and FBI Agent Denham (Kyle Chandler) who’s determined to bring him down.

Leonardo DiCaprio gives the performance of a lifetime as the Quaalude popping stockbroker who’s willing to do anything to get ahead. As out of control as Belfort is, he’s really a product of his environment and a government that allows companies to break hundreds federal laws and still stay in business. DiCaprio plays Belfort as the charming scumbag you can’t help but cheer for until he unleashes a speech that shows Belfort may be more ego-maniacal than it seems, and an explosive argument with his wife (played by Margot Robbie) that makes you wonder if he’s more of a bad guy than good.

DiCaprio’s great performance may be overlooked by critics who have a problem with the film’s brash display of adult subject matter and its hard R rating.

Despite the film coming in a hair under three hours, it’s surprisingly well paced – even when Belfort and his buddies Girls Gone Wild lifestyle gets a little repetitive. Scorsese could have told a Shakespearean drama to please moviegoers, but there’s something about the callous way the story is told and frantic in your face style it’s shot in that pulls you into the film. Maybe because parallels how Belfort, and those like him, lived their lives.

Time will tell if DiCaprio and Scorsese get nominated for Hollywood’s big night. Even if they don’t, there’s no denying how incredible it is when they work together. Let’s hope Wolf isn’t the last time.