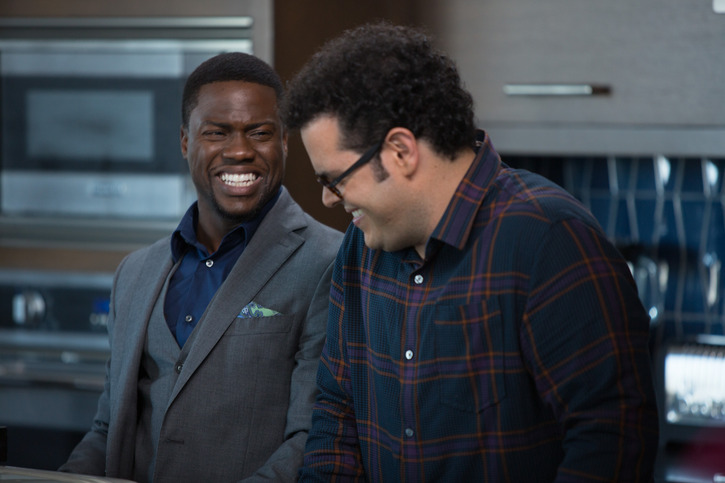 “Imagine Hitch meets Wedding Crashers with Kevin Hart and Josh Gad” is how I imagine the pitch meeting for The Wedding Ringer went.

In The Wedding Ringer, Doug (Josh Gad) is the groom-to-be with no friends and two weeks to come up with his side of the weeding party. In comes  Jimmy Callahan (Kevin Hart) a man who runs a best man-for-hire service for men in Doug’s situation. Doug hires Jimmy to be his best man “Bic Mitchum” and a group of Jimmy’s degenerate friends to fill out the rest of his groomsmen.

Jimmy and Doug are in a race against time to teach the groomsmen their fake identities,  keep they lie away from the bride (Kaley Cuoco-Sweeting) and her family, and get Doug ready for the biggest day of his life. Of course it wouldn’t be a comedy unless things didn’t go as planned.

The Wedding Ringer isn’t breaking new ground with its plot. Audiences have seen it a hundred times. For today’s standards, it should be a straight to DVD comedy starring comedians I’ve never heard of.  It’s like someone checked off every box under ‘Comedy involving a wedding’ because they didn’t miss a beat:

For some reason, the duo of Gad and Hart work very well together.  It’s like watching two basketball players carry a bad team to the playoffs. That’s not to say the supporting cast is terrible, they’re actually pretty funny – especially Ken Howard as Ed Palmer – and don’t take away from the movie at all. But there’s no reason this movie should work other than the two leads ability to carry the story.

Like everything Kevin Hart is in, he’s the biggest star on the screen. Even though he shines when he needs to, the film doesn’t rely on Kevin Hart to deliver all the jokes. Everyone has a decent amount of screen time and none of their gags seem too long or drawn out.  The R rating keeps a lot of the big laughs out of the trailers and gives us different sides of Kevin Hart since most of his films are PG-13.

While Hart focuses on comedy, Gad adds some humanity to the story and gives the film just enough heart to feel touching at moments and cringe worth at others. You need someone to cheer for, everyone else seems like a terrible person.

If The Wedding Ringer came out 10 years ago, it would be a box office smash. Unfortunately we’ve seen these story lines play out on television and cable for the better part of a decade. Broad wedding comedies are chicken soup and there’s just only so many ways you can make chicken soup.

For a movie that’s as predictable as they come, The Wedding Ringer is a funny, fun ride. It’s a raunchy comedy that feels like it was a decade too late in the making. This movie should be a dud but the seriously funny moments and cast of crazy characters make it entertaining.

And If you’re a fan of LOST, Jorge Garcia delivers a great line during the film’s final moments.