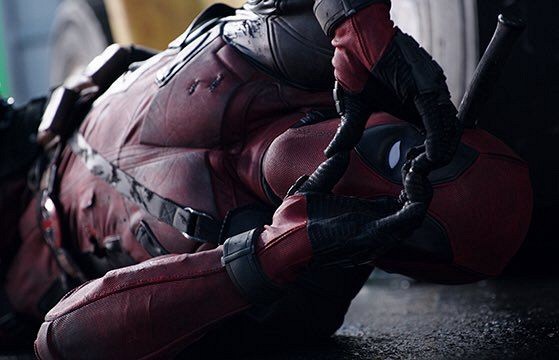 2009’s X-Men Origins: Wolverine left a lot to be desired. One of the few bright spots was Ryan Reynolds playing Wade Wilson aka Deadpool aka The Merc with a Mouth. Origins gave audiences a decent Wade Wilson but not exactly the Deadpool from the comics. They turned a hilarious mercenary into a teleporting zombie with his mouth sewn shut.  It was bad enough to make every Deadpool fan slam their chimichanga in disgust.

In 2014, test footage of Ryan Reynolds as Deadpool, in his iconic red and black suit, “leaked” and the internet reacted like teenage girls at a Justin Bieber concert.

After two years, lots of speculation, and some of the best marketing, audiences are finally getting the Deadpool movie they demanded. And this Deadpool isn’t watered down version. He’s a hard R (very hard R) gun blazing, foul mouthed mercenary who’s the definition of an antihero.

Deadpool’s origin story is told in a non-linear fashion.  When the movie opens, we meet Wade Wilson (Ryan Reynolds) and he’s fully immersed in his role as Deadpool. His disastrous fight on the freeway gets the attention of two X-Men watching, Colossus (Stefan Kapicic and Negasonic Teenage Warhead (Brianna Hildebrand).

Through a serious of flashbacks we learn Wade is a former Special Ops soldier who spends his days as a mercenary for hire, and he’s best friends with an equally foul mouthed bartender named Weasel (TJ Miller).  Wade meets Vanessa (Morena Baccarin) and they fall in love immediately. Just as their unconventional relationship turns into a fairytale romance, Wade learns he has stage four cancer. Without Vanessa’s knowledge, Wade signs up for top secret treatment that promises to not only cure his cancer but give him super human abilities.

Wade spends an undisclosed amount of time being tormented with treatment after treatment by Ajax (Ed Skrein) and his assistant Angel Dust (Gina Carano). After suffering through numerous sessions, Ajax activates the mutant genes in Wade’s body. The treatment cures Wade of his cancer, gave him superhuman abilities, and also left him grossly disfigured. Believing Ajax is the only person who can fix his unsightly appearance, Deadpool spends his days hunting him down in hopes of finding a cure.

First things first – Deadpool is not for kids. Not at all. He’s not “Spider-Man with a little cursing” or “The Avengers but a little raunchier.” Nope. This movie is as R rated as you can get and still be shown in theaters across the globe.

In an era where we get a nice roster of comic book movies a year, Deadpool is a surprising breath of fresh air. Batman v Superman> Dawn of Justice and Suicide Squad look dark and brooding, Captain America: Civil War deals with serious government issues, and X-Men: Apocalypse showcases a destructive dystopian future. Deadpool is fun and simple, the way comic book movies forget to be at times.

Despite the film’s lengthy synopsis, it’s a movie about a guy who did a thing for a woman he loved, got superpowers, got double-crossed in the process, and now wants revenge. Just like the 80’s action movies minus the cocaine and bad hair.  It’s not trying to tie in five other movie franchises while telling its story. Its only purpose is to tell Deadpool’s story and Deadpool’s story alone. It’s easy to forget how refreshing an uncomplicated comic book movie can be.

The first is Ryan Reynolds. Something about the Deadpool suit transforms him into a rock star.  He knocks it out the park in every scene. Do you know why Reynolds is amazing? It’s impossible to see anyone else as Deadpool besides him. He embodies the role the same way Chris Evans does with Captain America, Robert Downey Jr. with Iron Man, and Hugh Jackman with Wolverine. Even though this is the first time we’ve seen Reynolds as this Deadpool onscreen, it feels like he’s lived in the character for much longer.

The second is the movie committing to what it is and sticking with it. It never tries to be anything it’s not. Deadpool is an R rated comic book movie that’s offensive at times an unapologetically violent the rest of the time. It’s an in-your-face action story that doesn’t waste time on Wade’s back story. Instead of spending 45 minutes waiting for Wade to turn into Deadpool, his story is split up in a way that makes it easy to digest. And just when the action is on overload, the movie pauses to catch its breath and then back to more action.

Deadpool isn’t for everyone. It’s the most polarizing comic book movie in years. Some will love how true it is to the character. Others will see it as is comic book movie cheapened by its R rating and frat boy humor. No matter where people stand on the film, Ryan Reynolds pulled off the impossible. He delivered the movie the fans have been crying for since 2009. It’s not the same cookie cutter comic book movie (although it did end with things falling from the sky). Deadpool may turn people off, but it’s also what makes the character and the movie special.