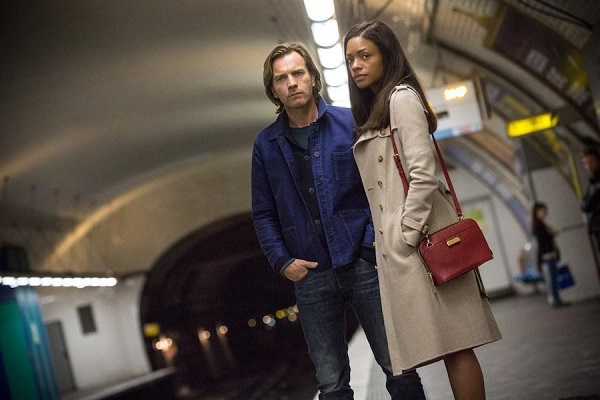 Author John le Carre’s spy stories are perfect for film adaptation. From 1996’s The Russia House to 2014’s A Most Wanted Man, le Carre’s unique take on espionage makes for proactive storytelling in an era of big budget action films.

The latest le Carre adaptation is Our Kind of Traitor – the story of an unlikely married couple caught between a money launderer, the Russian mafia, and MI6.

Traveling with his wife Gail (Naomie Harris) in Morcco, Perry (Ewan McGregor) is approached by a stranger named Dima (Stellan Skarsgard) who ask him to deliver a thumb drive with sensitive information to MI6 back in London. The people Dima laundered money for want him dead and he plans use the information on the drive to help save his family.

After receiving the information, MI6 agent Hector (Damian Lewis) believes someone from inside his office may be involved. He has no choice but to work outside of his office and use Perry and Gail to get a piece of critical information from Dima. Against their better judgment, Perry and Gail agree to help because they’re the only people Dima trust.

Even with the film shooting at amazing locations, Director Susanna White minimalism focuses the story and its four main characters – Perry, Gail, Dima, and Hector. There are no big action pieces or white-knuckle car chases. However, there is plenty of discussions about government oversight and their ability (or inability) to protect the people trying to help. This would be boring in any other spy movie considering the subject matter, but Hossein Amini’s script creates plenty of tension and keeps the story moving along at a decent pace.

In a movie full of heavyweight actors, Skarsgard is the standout performer. He gives, what should be an unlikable character, enough charm and nobility to make him the most lovable person in the movie. Skarsgard and McGregor shine when they’re onscreen together. The contrast between the two men made their interactions the best part of the film.

Naomie Harris gives a great performance as Perry’s concerned, but helpful, wife. It was good to see her character have something to do besides get in the way and be disgusted by whatever decisions Perry made.

The film could’ve benefited from a shorter run time and by showing the audience exactly what Dima was running from. The film features two mafia meetings, but story never investigates who those shady people are.

Our Kind of Traitor isn’t a summer action movie. It’s a story about international crime fighting and the blurred lines between national security and personal interest. It may struggle to find its audience amidst the giant blockbusters of the summer. I will definitely be a movie people enjoy on Netflix and ask if it was ever in theaters.