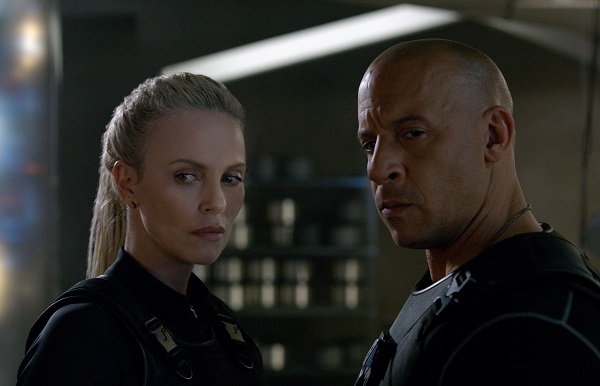 The 8th installment of the Fast and Furious franchise is much different than street racers stealing electronics in 2001’s The Fast and the Furious. It’s now a popular film series that keeps adding star power like they’re the Golden State Warriors. In Fate of the Furious, Dom and his team are basically a group of superheroes. They operate alongside the government or outside the government, and save the world every few years – nobody on the team has special powers, but that doesn’t stop them from executing superhuman feats every chance they get.

This time, the group faces their biggest threat…their fearless leader, Dominic Toretto (Vin Diesel). After a mysterious high tech terrorist named Cipher (Charlize Theron) threatens to hurt someone Dom cares about, he’s forced to turn on his team and do Cipher’s bidding.

Confused and upset, the team uses every resource they have – including Fast 7 villain Deckard Shaw (Jason Statham) – to track Dom and stop Cipher’s evil plans before it’s too late.

To be honest, Cipher’s plans for world domination are as important as the type of shoes the characters are wearing. Nobody cares. There’s some muddled explanation given during one of Cipher’s villainous monologues, but none of it really matters. You know what matters?  A zombie car sequence in New York City. You know what else matters? Hobbs pounding the life out of people during a prison fight scene.

The Fast and Furious movies are unique for many reasons. First, the franchise has led the way in diverse casting since the series started. Second, they’ve had films directed by John Singleton, Justin Lin, James Wan, and F. Gary Gray. Third, the stories always include strong female characters. Always.

The most unique thing about the franchise is how bad/good the series is. The movies are not what many people would consider “good”.  The acting us subpar, the dialogue is so-so,  there’s guaranteed to be a predictable storyline + a dinner scene with the crew, and over-the-top cartoonish villains. Yet, for some reason the movies are incredibly entertaining. Not only that, they’ve gotten more entertaining as the series moves forward. How is this even possible? It’s hard to tell if the series is a 17 year Black Swan Event or if Fast and Furious is the future of cinema.

This is the first film since Paul Walker’s passing, and it was unclear if the movies would have the same feeling. For fans of the series, Fate of the Furious does not disappoint. Hobbs (The Rock) and Shaw (Jason Statham) bumping heads and threatening to beat each other to death every five minutes are more charismatic than it has any business being. They have amazing chemistry together. It’s much better than the Dom vs. Hobbs feud in Fast Five.  I wouldn’t mind seeing The Rock and Statham team up in a buddy cop film.

The story continues the hallowed tradition of ignoring the laws of physics and mathematics, villains with unlimited henchmen, and no real human emotions (Yes, I’m talking about Dom).

Tyrese is back doing Tyrese things as Roman. I can’t point to a signature Tyrese performance, but he’s surprisingly good in this role. He takes on the comic relief role and he excels at it, especially during the film’s climatic scene.

One of the best sequences involves Shaw taking out a bunch of goons on a plane. It’s reminiscent of 2007’s action comedy Shoot ‘Em Up. It’s funny, action packed, and everything you’d want from a Fast movie.

As far as the other action, the story keeps the engine going from its ridiculous start to its even more ridiculous finish. Director F. Gary Gray delivers all the action any fan of the franchise would want. There are bigger set pieces, bigger action sequences, and bigger stakes this time around. A submarine chasing the team isn’t the most insane thing in the movie. That’s what makes the Fast movies so much fun.

Fate of the Furious represents everything the franchise has turned into, powerless superheroes saving the world one bottle of NOS at a time. It’s a series that keeps upping the stakes and getting better with age like a fine wine. More like a fine wine on steroids. I can’t wait to see what happens when they go to space.