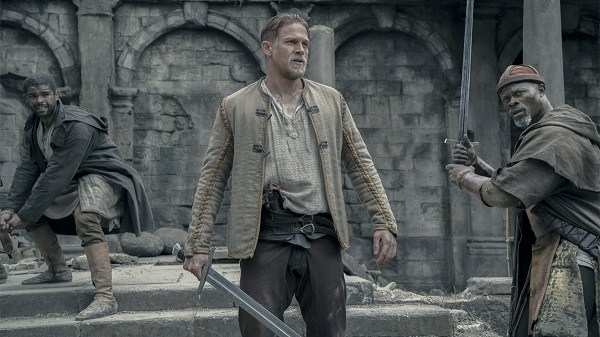 Guy Ritchie’s King Arthur: Legend of the Sword is the latest film based on the legend of King Arthur. Sons of Anarchy’s Charlie Hunnam plays a young Arthur aka CrossFit King Arthur who was separated from his family royal family as a child (baby Mosses style) and raised in a brothel.

Years later, a prophecy speaks of the true King returning to claim the sword Excalibur from the stone it’s fastened in. The current king, Vortigern (Jude Law), wants to kill Arthur before he claims his rightful throne and rule the kingdom. Vortigern also wants Excalibur to help wield its power for some end of the world/doomsday scenario.

Arthur must decide if he’ll run or fight for his true legacy as king. And yes, we’ve seen this story 1,000 times before.

There’s plenty to like about King Arthur, and also plenty of head-scratching moments. For fans of Guy Ritchie, there are a few signature Ritchie sequences from the camera angles and witty dialogue to a hilarious retelling of Arthur’s fight with a group of vikings. Unfortunately, those moments are very few in a movie with a 2hr 6 min runtime.

Most of the story is dominated by a bloated plot that includes a tower with a flame, a “Mage”, one magical octopus lady, Vortigern turning into Medieval Ghost Rider, 20 flashbacks of the same scene, and enough slow-motion yelling to make Michael Bay jealous. Some of those things are loosely explained, but most of them aren’t. It feels like a 14 episode Netflix series crammed into one movie. There’s so much in Arthur’s legendary world that’s never examined further than a brief mention.

If there’s one silver lining, it’s Charlie Hunnam emerging as a leading man. He’s starting to display that “it” factor all the good actors have. Strapped with a terrible plot and predictable protagonist behaviors, Hunnam is still able to shine as a charismatic lead. In a better film, Hunnam may have given an even better performance.

Outside of Hunnam’s performance and a few fun action sequences, King Arthur: The Legend of the Sword is easily Guy Ritchie’s most forgettable film.  It’s an overstuffed, under explained action film that’s more interested in creating a franchise than telling a singular cohesive story. Ritchie is a talented enough director to rebound from this misfire, but I hope this is the last we see of King Arthur.