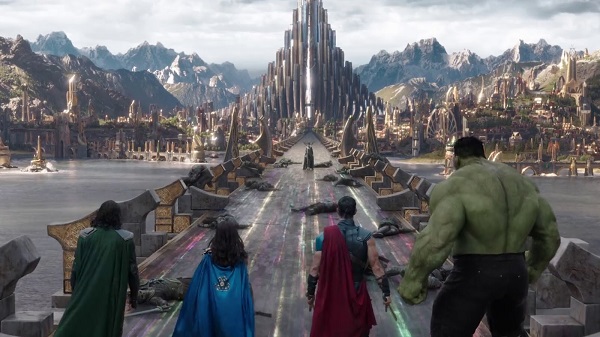 Thor: Ragnarok is the third installment in the Thor movie series from Marvel Studios and the first time we’ve seen Thor on the big screen since 2015’s Avengers: Age of Ultron.

Ragnarok catches up with the Thor (Chris Hemsworth) as he’s searching for Infinity Stones. When Thor is told Odin (Anthony Hopkins) is no longer on Asgard, he returns home to find Loki (Tom Hiddleston) pretending to be Odin in his absence. After finding Odin on Earth (thanks to Doctor Strange), Loki and Thor are approached by Hela (Cate Blanchett), the previous leader of Asgard’s armies, who plans on returning to Asgard and using their armies to conquer all of the Nine Realms.

During their escape from Hela, Thor and Loki are forced out of the Bifrost Bridge. Thor lands on Sakaar (a junk planet) that’s ruled by a man known as Grandmaster (Jeff Goldblum). Valkyrie (Tessa Thompson) aka Junker 142 captures Thor and brings him to the Grandmaster for his gladiator games known as The Contest of Champions. Thor is told if he beats the champion, he’ll get his freedom. Unfortunately, that champion happens to be The Hulk.

Reunited with his old Avenger buddy, Thor puts together a team to help him escape Sakaar and get back to Asgard before Hela destroys Asgard and The Nine Realms.

Director Taika Waititi (Hunt for the Wilderpeople, What We Do in the Shadows) has given us the most unique Marvel film to date – its one part comedy, one part comic book movie, and one part trippy space adventure. Because Thor is a Marvel property there are threads of this film that are consistent with every Marvel film since Iron Man. Outside of those threads, Ragnarok is a colorful space comedy. It’s also a beautifully shot adventure that expands the galactic world of the ever growing MCU (Marvel Cinematic Universe).

Chris Hemsworth is really good as Thor, and this time he’s allowed to show a different side of the character. Thor has previously been the stoic God who shows up to be the Avengers muscle in times of need. This time, he’s a much lighter, playful, and enjoying his interactions with the other heroes around him. Not to mention Thor gets to flex his muscles as the God of Thunder in a few action scenes.

The MCU newcomers are great additions to Thor’s storyline. Cate Blanchett is a great Hela. As Marvel’s first female villain, there’s a lot riding on her shoulders, but she doesn’t disappoint. She’s as villainous and as powerful as you’d expect her to be. Tessa Thompson adds her amazing talents as Valkyrie. She plays a badass warrior who is well equipped to take care of herself. Thompson’s talents shine brightest during her interactions with Hulk and Bruce Banner (Mark Ruffalo).

Out of the newcomers, Jeff Goldblum’s Grandmaster outshines them all. Goldblum is one of Marvel’s best casting choices. He’s absolutely perfect as an eccentric ruler of a junk planet who reluctantly kills people but seems to kind of enjoy. From constantly getting Thor’s name wrong, to the verbal jabs, to the “melt stick”, Goldblum is a delight. Hopefully we’ll see more of the Grandmaster as the MCU movies forward.

Thankfully, Ragnarok isn’t just jokes; there are some pretty good action sequences. The opening sequence with Thor is fun. Hela showing up on Asgard as a violent tornado of rage is everything you’d expect to see. The final battle is a lively one involving Thor, Loki, Valkyire, and Hulk. Each character gets their moment to shine during the big battle on Asgard.

Thor: Ragnarok is a lot of fun and one of the best comic book movies Marvel’s made. This is a fresh take on Thor that will make his character a lot more likable moving forward. It’s everything you want from an action movie. After Nolan’s Dark Knight Trilogy, everyone wanted to make a serious comic book movie that was dark with brooding heroes and sadistic villains. Much like what James Gunn did with Guardians; Waititi is here to remind us that comic book movies can be fun and bright. He showed us how directors can color outside the lines and still deliver a comic book movie that hits all the necessary notes. You can use bright colors, fun visual effects, silly characters, and humor to tell your story – they are comic book movies after all.