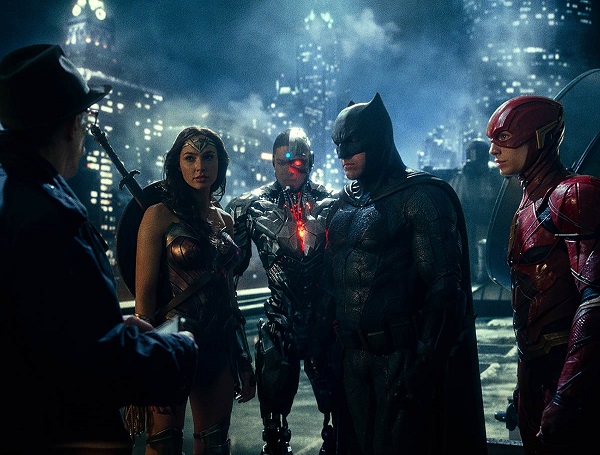 Warner Bros/DC’s Justice League is the big superhero team-up fans have been waiting for since it was announced in 2014. Batman, Wonder Woman, Cyborg, and Aquaman join forces to birth the Justice League.

After the events of Batman v Superman: Dawn of Justice, the world is mourning the death of Superman. While the world aches, Batman (Ben Affleck) and Wonder Woman (Gal Gadot)) are recruiting a team to stop Steppenwolf (Ciaran Hinds) and his army of Parademons from finding three mother boxes hidden on earth and using them to take over the world.

They’re recruiting a  kid with super speed known as The Flash (Ezra Miller), a cybernetically enhanced human named Cyborg (Ray Fisher), and an Atlantean with aquatic abilities known as the Aquaman (Jason Mamoa).

The five superheroes fight to work as a team and save the world from total destruction.

Justice League underwent “massive reshoots” after director  Zack Snyder stepped away and Joss Whedon replaced – and it’s apparent. Whedon’s ability to write quippy dialogue and silly back-and-forth banter is what made his time with Marvel so successful. Justice League has a lot of those moments between the JL members and it helps balance out the end of the world dread that hangs over the heroes.

The best Whedon-esque sequence happens during a conversation the group has about what to do with a motherbox. They go back-and-forth, disagree, talk about being heroes, hope, and what the right thing to do is. The whole scene was light, funny and was a very organic way to show who these heroes are underneath their costumes.

The humor and lighter tone is a hard shift from the doom of BvS and looks like the direction they’re headed with their films. It’s a much needed change of course that will allow them to try different approaches to Batman, Superman, and the other JL members who haven’t made their debut on the big screen.

Aquaman gets all the shine in the TV promos, but the real scene stealer is Ezra Miller’s Flash. Miller was between a rock and a hard place with CW’s Flash TV show being so successful and fans loving Grant Gustin’s portrayal of Barry Allen. Miller was able to play his Flash in a much different way – he’s funny, quirky, and way out of his element taking on the likes of Steppenwolf. Miller also does so much with his eyes and facial expressions that communicate exactly what he’s feeling in the moment without having to say a single word. There’s hope for The Flash solo movie after all.

Steppenwolf is latest brooding CGI covered villain to pop-up in a comic book movie. His motivation is taking over the planet and destroying human life. The character is involved in a more sinister plot involving Darkseid, but the film doesn’t touch on that too much. So, we’re left with a one-dimensional villain and no reason to care about his motivations.

The movie isn’t all wacky banter and funny Flash moments. There’s enough action to keep the film interesting and countless easter eggs that I’m sure someone will breakdown in a 7 min YouTube video

What Justice League gets right is the team aspect of The League and how they interact with each other. Personalities clash and characters have their own ideas about what’s right and what it means to be a hero.

Justice League is the most comic book movie DC/WB has made to date. It doesn’t add anything new to the genre but manages to be entertaining and it makes an effort to lighten up the films (literally). Justice League feels the most connected to DC Comic world and with its characters and the little world building that happens during the movie. After a few swings and misses, these films may be headed in the right direction.

There are two post credit scenes. Make sure to stay for both.