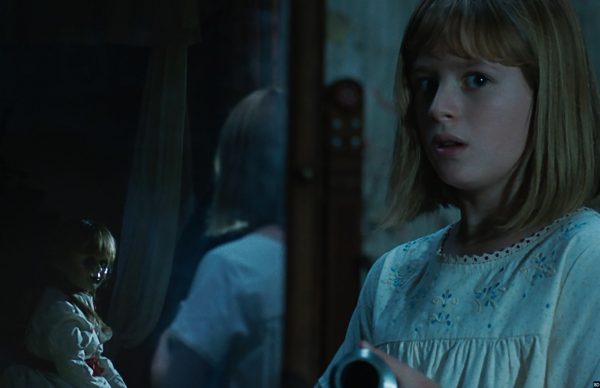 Annabelle: Creation is technically a sequel. In terms of story, it’s a prequel to Annabelle…a film that’s a prequel to The Conjuring. With Hollywood embracing origin stories recently, Annabelle gets a film to tell the how the creepy possessed doll came to be.

Twelve years after the brutal death of their daughter, The Mullins welcome a group of orphan girls and a nun into their home. The story mainly focuses on the two younger girls – Janice (Talitha Bateman) and Linda (Lulu Wilson). There are plenty of rooms to explore in the house and Janice is told not to enter one specific room that stays locked. What does Janice do? Of course she enters the room like any nosy kid would. This film could easily be titled “Curiosity Killed the Kid: And Maybe Some Adults Too“.  In the room, a presence leads Janice to a closet where the Annabelle doll creepily sits in a chair. Janice opening the closet door released Annabelle to wreck havoc on the house and its guest. As the days go by, strange things happen in the house and become more and more frightening.

If all those outrageous requirements get a pass, this can be a very enjoyable scary movie.

For starters, the story has a more classic horror film vibe. There’s less blood and guts of the Saw variety and more scary environments, punctuated by disturbing silence. Director David Sandberg (Lights Out) does wonderful job creating conditions that make Annabelle’s origin fit into the The Conjuring world that’s been built over the years. As absurd as the story is, everything that happened feels like it could take place in that world.

Sandberg’s best work is when a character is doing something in the foreground and you see a person or thing move in the background. Maybe something happens during that sequence, maybe it’s nothing. But that uncertainty will keep audiences engaged for every single frame.

What the film lacks in overall scares, it makes up for in tone. The climate of the film never changes – it’s constantly hovering between, “Something is going to jump out and scare you”, and “Something really bad is about to happen.” There are few really good jump scares and well crafted scenes. It’s a fun haunted house movie in the vein of The House on Haunted Hill – a group of people trapped in a house and they’re terrorized by a ghost. There are no heroes that come bulldozing in, the group has to find a way to survive and get out the house.

The young cast does a fantastic job of yelling and screaming for their lives. Other than wanting to be adopted, none of the girls have a background or a storyline worth remembering. The girls are literally there to be terrorized over and over again. There’s at least a dozen moments that scream, “Why are you still in the house.” Sadly, the characters short term memories allow them to stay in the house and get terrorized some more.

Annabelle: Creation is a fun roller coaster ride of scares and, “What are you doing?”moments. It’s never too scary or too gory for people who don’t handle horror well. It also has enough fun horror tropes to keep fans of the genre satisfied. There are just enough scares to make it a solid horror film that fits perfectly with recent films in its genre. There are a few edge-of-your-seat moments, but it’s mostly just a fun and entertaining.