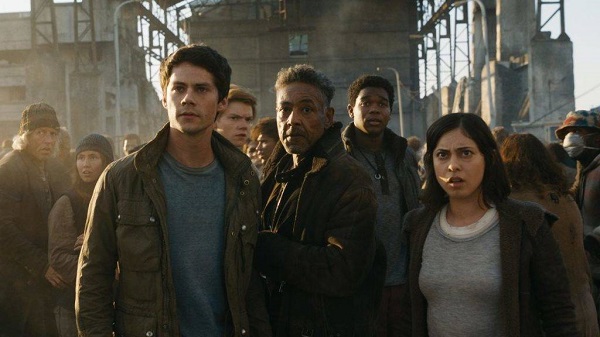 Maze Runner: The Death Cure is the third and final installment of the Maze Runner franchise, based on the James Dashner book series.

Even with the production being shutdown in 2016, the final Maze Runner is here. This time there are now mazes and a lot of running.

The story picks up a short time after the events of Maze Runner: The Scorch Trials. Thomas and the other “Gladers” are still on the run from WCKD and trying to rescue their friend Minho (Ki Hong Lee). Their search leads them to the Last City where Minho is being held by WCKD. Also in the Last City is the double-crossing Teresa (Kaya Scodelario). She’s busy working for WCKD and is using Minho’s blood to find a cure for the Flare – the film’s title may be a little too on-the-nose.

Thomas and his friends make some unlikely allies along the way that help them infiltrate the Last City to rescue Minho from WCKD.

Death Cure is YA novel adaptation with some skillful action sequences sprinkled throughout. It has all the elements that make YA adaptations attractive to fans of the genre – a cheesy love story, over-the-top bad guy (Janson played by Aidan Gillen), and kids being more skilled than their adult counterparts.

Side note: The shootout during the opening sequence shows the WCKD security guards went to the Stromtroopers Shooting Academy. None of these security guards should be employed. They’re awful. There are a number of times they get the drop on these kids and can’t hit the broad side of a barn. It’s laughable.

Walton Goggins shows up, looking like The Toxic Avenger, as a rebellion leader outside the Last City’s walls. Giancarlo Esposito and Barry Pepper add their talents as well in returning roles. The plot could’ve used a lot more of these talented actors, but the movie isn’t about them.

Dylan O’Brien continues to prove he has star quality. Death Cure doesn’t give him a lot to do besides run and be angry, yet he does a lot with the little he’s given. O’Brien shines brightest during the action sequences.

The action in the film feels like it belongs in an action heavy, r-rated movie. There’s a lot of big action set pieces that feel a little too mature for this film. From the opening Fast and the Furious style train sequence, to the multiple shootouts, to the flaming car slipping down the street, all of the action is very well done. If audiences saw these action clips out of context, they wouldn’t think they were part of a YA trilogy not named The Hunger Games.

On the surface, Death Cure can easily be dismissed as another boring book adaptation. However, it manages to be a decent action film about a group of kids trying to save their friend. It’s a solid end to a trilogy that was able to make three different types of movies that told an overarching story. Maze Runner is a mystery, Scorch Trials is a zombie movie, and Death Cure is the fun action finale that punctuates the entire series.