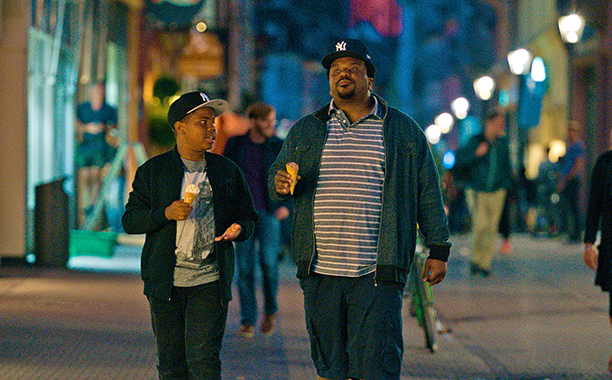 Known for his comedic roles, comedian/actor/musician Craig Robinson makes a dramatic leap in this year’s surprise hit Morris From America. Robinson took a few minutes to talk about winning a Special Jury Award at Sundance, working on Morris from America, and the crazy things people yell at him on the streets.

Is this your first time in Seattle?

Craig Robinson: No. I’ve performed at Parlor Live in Bellevue. I did a show here with Rain Wilson one time as well. I love Seattle.

You won the Special Jury Award for Breakthrough Performance at Sundance for your performance in Morris from America. Were you shocked?

CR: Shocked, surprised, frantic – I was so excited. I left Sundance seven days before. The [Chad Hartigan] called me and said, “They want to fly you back because you won an award for acting.” I got on a plane and got my award that Saturday.

When I first heard of Morris, it reminded me of when I was 14 and had to move from Sacramento California to Vancouver Washington.

CR: Man, that was your life. [laughs]

What made you want to do this project?

CR: It was the script. The first thing was the vernacular. The way [Curtis] talked is the way I talked. I felt it. I was moved by the relationship between father and son. So I met with the [Chad Hartigan] and he was cool. Then he started telling me about [Markees Christmas] and he has a joy about him. He’s got that fun playfulness about him. It’s infectious.

Did you give him any pointers?

CR: Chad was on it. You don’t want someone to resent you like “What now teacher?” [laughs]. I don’t remember saying too much to him. I let Chad do his job and when I’m directing I’ll get my two scents in.

So you read the script and realized you were going to Germany.

CR: Yes, I was looking forward to it. Being a comedian/actor has been my ticket around the world. Go see some of the world, do some comedy, and get paid. It’s always exciting to go somewhere I’ve never been and explore to see how they live. That was very appealing. Now, where are we going to get these two weeks from?

It took two weeks to film?

CR: I had to weeks to film, everyone else had two months. I came in the last week for Heidelberg and a week in Berlin.

You’re a professional if you can come in and knock it out in two weeks.

CR: They had to set it up like that. I can’t act like it’s my first time on set. You have to get up, be on time, and have your lines ready. You have to be ready for the moment. You always want to be prepared. There’s some leeway on comedies to play around a bit. With dramas, there’s much more dialogue so you have to be on it.

David Gordon Green talked about how much they played around with the scripts on East Bound and Down.

CR: You want to talk about prepared, we would have rehearsal after rehearsal leading up to the scene. Everybody does that, but there’s something special about David. We would explore in the rehearsals. One time he said, “Put your hands in the food and say ‘Still warm’.” – that’s where that came from. Rehearsals can yield some wonderful results.

What was the hip-hop scene like out in Germany?

CR: I didn’t get a chance to check it out. I walked around a little bit but didn’t see much of anything that wasn’t near the hotel. I did go to a 1,200 year old castle, the Heidelberg Castle. It’s dope. It’s funny, you can see American movies with different titles out there. We were staying at the SoHo in Berlin. ASAP Rocky invited me to a concert while he was out there. Do you remember that song, “If you want to ride, ride the white horse”? That group is called Laid Back and I just missed them singing White Horse. I probably would’ve thought they were a cover band.

Do people see you out and invite you to their shows regularly?

CR: It’s a blessing. It doesn’t happen all the time, but it does happen. People see your comedy and want you to check out their show.

You’ve been in so many different things and you have a diverse fan base. Do you feel that when you’re walking the streets?

CR: It’s crazy. From young to old, it’s always a surprise. People who look like they just got here from God knows where and they see you and say, “Office!”. It’s hysterical. It’s always nice to see. In Germany, I could walk around and a few people would know me.

Do people yell stuff at you?

What are you hoping people get from Morris of America?

CR: I hope they get to see that other side. This is a nice transition movie. There’s some funny stuff in there, but you get to see some heart. I hope people think about patience and how to deal with kids. I hope they think about diversity.