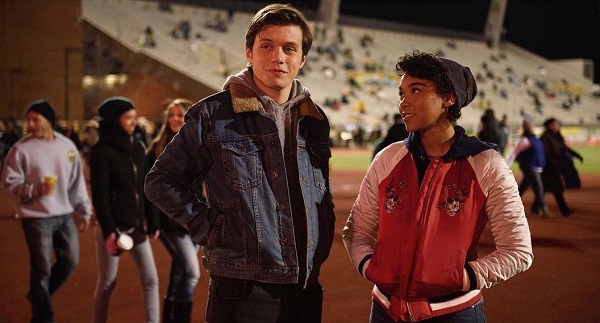 I sat down with director Greg Berlanti and two of Hollywood’s brightest young stars – Nick Robinson (Kings of Summer, Jurassic World) and Alexandra Shipp (X-Men: Apocalypse, Tragedy Girls) – to talk about their new film Love, Simon, a coming of age love story about a young kid with a big secret. We talked about high school crushes, working with young actors, and being an ally.

I related to Love, Simon because I know how it feels to like someone and to be in a situation where you can’t like them.Alexandra Shipp

I’ve been reading interviews about Greg (Berlanti) for years. Everyone makes him sound like Ghandi. Everyone says he’s an incredible person. Is this true?

Nick Robinson: It is true. Greg is one of the most kind and generous people. He’s a very talented.

Alexandra Shipp: I would say Greg is a mixture of a unicorn and a dragon. This mystical creature that you always picture in your mind, but never know what they’re actually going to be like. You think these types of honest communicative creators don’t exist anymore, and if they do they’re bougie – that’s not Greg’s style. It was really fun to work with someone who had a vision and was also open to our interpretation of our characters. That’s rare in this business. That’s why I love him so much; I had fun working with him.

NR: He can also breathe fire like a dragon… [laughs]

Greg Berlanti: I have to do that for my 2yr old regularly. He’ll request characters and creatures. He’s big into dragons right now. He’ll say, “Hey dragon” and that’s my cue.

Is your normal process to be more collaborative with the actors you’re working with?

GB: When I’m directing, the kind of stories I’m attracted to are about people. I can’t do what [actors] do. I have so much admiration for people who can be that vulnerable on a set. If you’re trying to get an honest portrayal, sometimes you have to be that for them so they can know where you stand. The more you lead with your heart, the more apt they are to want to lead with theirs.

What would you tell another director about these two young actors (Alexandra Shipp and Nick Robinson)?

GB: In my experience, there are different kinds of actors. Like athletes, some need to be coached in a certain way. With some you need to talk about the text, while some are more technical. What’s great about these two is they’re both about the text and understanding it, but they’re also very technical. They’ve both been acting since they were young and it comes in very handy when you don’t have a lot of time to shoot a scene. They’re both open to be directed in multiple ways.

Love, Simon is a coming of age story and a love story. Do you remember having a high school crush?

NR: That’s when crushes are the most intense. That’s when it’s happening for the first time and you’re still getting to know yourself. I remember having some intense first crushes and the feeling of not knowing if it was reciprocated or not.

AS: That’s always my situation. By the time I got to high school, I was really good liking people. I did the leg work and liked everyone. I was one of those kids in kindergarten who would say, “This is my boyfriend, that’s my other boyfriend, and that’s my girlfriend.” I related to Love, Simon because I know how it feels to like someone and to be in a situation where you can’t like them. I know what that unrequited love feels like.

If you could’ve played any other character in Love, Simon, who would it have been?

NR: Ms. Albright (Natasha Rothwell) or maybe Wyck’s (Godfrey) son. He is a producer on the film and his son is the kid we invite to the party.

AS: I want to be Suraj (Haroon Khan). I probably was Suraj in high school – that weird friend who was always making jokes.

What are you hoping are thinking about after they watch Love, Simon?

NR: I would like to think they’re talking about inclusion and feeling included and represented. Even if you aren’t part of the LGBTQ community, hopefully feeling like they can relate and gain a new perspective.

AS: One of the things I hope people take away form this is that they can be an ally. One of the scenes that struck me the most was when the guys were making fun of Simon. I went up to Greg and said, “(Abby) doesn’t stand up or do anything?” He said, “I know you want to, but we want the audience feel that way. You have to allow the audience to feel that. “I want people to watch this movie and see injustice happens on many levels, it’s not just racial or gender based. It’s also against people in the LGBTQ community. You can be an ally and say, “I don’t know this kid, but nobody deserves to be treated that way.”

GB: My favorite films about young people and for young people are ones that imprint on you when you’re young. They live with you for a long time and they’re the kind of movies you watch and think about the rest of your life. The most successful version of this film is one that affects someone and they carry the movie with them for a while. My hope would be when they’re first leaving the theater it’s like they just heard a song that’s affected them. When they see it again later in life, it’ll bring back a flood of memories of that time.