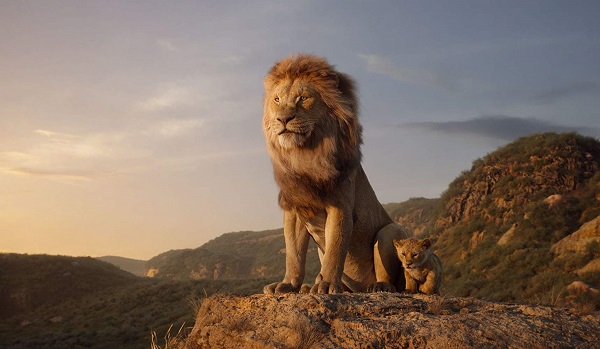 The Lion King, an adaptation of the 1994 Disney classic, follows the story of a young lion named Simba. If you’ve been living under a rock for the past 25 years and somehow missed The Lion King (1994), The Lion King II: Simba’s Pride, The Lion King 1 ½, the very popular Broadway musical, or the numerous memes associated with the film – here’s a brief synopsis:

A young lion named Simba has his right to the throne of Pride Rock challenged after his uncle, Scar, spearheads a coup and convinces Simba to leave The Pride Lands.

In many ways, The Lion King is a coming of age musical about a young boy struggling with fear, guilt, and the responsibly of being king. And yes, we’ve seen similar plots before in Black Panther and Aquaman.

Much like 2016’s Jungle Book, director Jon Favreau pulls the audience into a fully realized CGI world. The world created in The Lion King looks and feels as real as the world outside our windows. The animation and computer graphics are absolutely mind blowing. It’s hard to tell if some shots or stock footage from National Geographic or CGI. One of the big surprises is how well they nail feline behaviors. Form the paw licks to the growls and purs, Favreau and his team didn’t miss a single detail.

Not much of the plot has changed from 94’ animated film. It’s almost a shot-for-shot remake. The big difference is a few of the songs. Scar (Chiwetel Ejiofor) gives a rendition of ‘Be Prepared’ that’s less upbeat than the original. Ejiofor delivers a more toned down version with no marching hyenas, flames, or volcanic eruptions. The new song is ‘Spirit’ by Beyonce that plays as Simba (Donald Glover) and Nala (Beyonce) make their way back to The Pride Lands.

The voice acting is very well done. It’s difficult to imagine anyone besides James Earl Jones as Mufasa and he does a great job reprising his role. Beyonce does a fine job as older Nala. Beyonce is such a bigger-than-life figure with a recognizable voice, it’s hard NOT to hear her and wait for her to transition into Diva or I Care but it never takes you out of the film. The standout performances come from John Oliver as Zazu, Young Simba and Young Nala (JD McCrary and Shahadi Wright Joseph). Along with Circle of Life/Nants’ Ingonyama, the young actors are responsible for ushering audiences into this story. They do a good job bringing the nostalgia and love of the first film into the first act of this story.

The stands out characters are Ejiofor’s Scar and Billy Eichner and Seth Rogen as Timon and Pumbaa. Scar is one of cinema’s best villains and Ejiofor delivers a scar that’s cunning, dismissive, and evil without breaking a sweat. Ejiofor plays an excellent villain. Hopefully he’ll get more opportunities to do so in the future.

Timon and Pumbaa are the comedic relief this film desperately needs. Rogen and Eichner’s voice inflections make the comedic duo so heartwarming and fun. Studios understand the use of comedy in animation more than they did 25 years ago and it’s evident in how these characters are brought to life.

The Lion King is an excellent retelling of a classic Disney tale. The ensemble cast brings The Pride Lands to life along with the jaw-dropping animation and classic songs. This is one of Disney’s best remakes that’s  full of adventure and fun for the whole family.