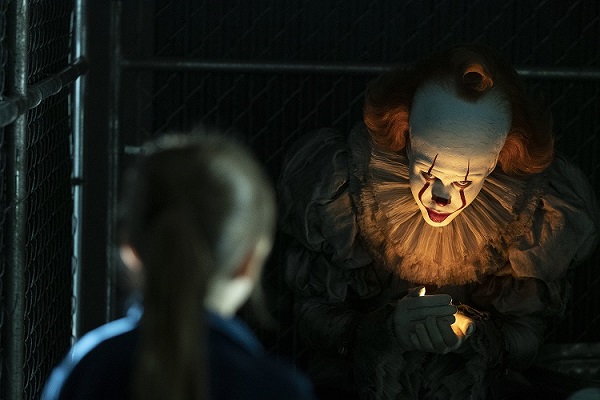 It Chapter Two is the sequel to 2017’s surprise hit It – based on Stephen King’s book and the 1990 ABC miniseries. 2017’s It focused on the Losers’ Club during the summer of 89’ and their first encounters with Pennywise.

Once back in Derry, the Losers start to remember what happened 27 years ago. Fearful of what Pennywise might do, the Losers band together to fight Pennywise again. Mike has been studying the past two decades and has a plan for defeating the clown, once and for all.

The star of 2017’s It was Skarsgard as Pennywise. As great as Skarsgard is during Pennywise’s performances/kills, Bill Hader steals the show as Richie. Hader brings the funny that made him a household name during his time on SNL and he has gives a wisecrack like Richie some emotional death. Hader has some of the best moments, especially during the final act.

It’s hard to replicate the magic of the first film. Even with so much of the film being different, director Andy Muschietti captures as much as that magic as he can with interesting kills, insane visuals during the Pennywise scenes, and genuine fear for the lives of children.

The adult Losers battle with Pennywise takes up a bulk of the film. Some of the scary chase scenes are a little too cartoonish and over-the-top. They’re heavily CGI’d moments that don’t play as well they did in the previous film. The big showdown happens during the third act and doesn’t disappoint – everything before that is just a big scary spectacle.

The real entertainment is Pennywise terrorizing the residence of Derry. The film is at its best when it focuses on Pennywise’s impact on the people Derry. The story opens with a horrifying Pennywise appearance that sets the tone for the rest of the film. The most interesting deaths involve two children in Derry. It’s not just how creepy the kills are, it’s everything Pennywise does that makes those sequences so terrifying. Muschietti brilliantly slow rolls the kills to make the audience helpless spectators to a death they know is coming.

Skarsgard’s Pennywise is one of the best horror villains we’ve had in years. He gives another masterful performance. Everything Pennywise does is a performance, even the visions he gives people are dramatic. Skarsgard owns the character by giving him a new voice. He can rest knowing he’s helped frighten a new generation of kids.

At 2hr 49mins long, the film does feel a little stretched out. 20-30 mins could’ve easily been shaved off, but it doesn’t ruin the enjoyment of the film.

It’s hard to understand the madness of Stephen King. Muschietti does a great job putting King’s madness onscreen. It Chapter Two is a fitting end to one of the best horror stories in years. There are some good scares plus a hilarious homage to 1982’s The Thing. It Chapter Two has a great cast, its well written, and wildly entertaining. It’s one of the best horror movies of the year. Too bad we won’t get to see Pennywise onscreen again.