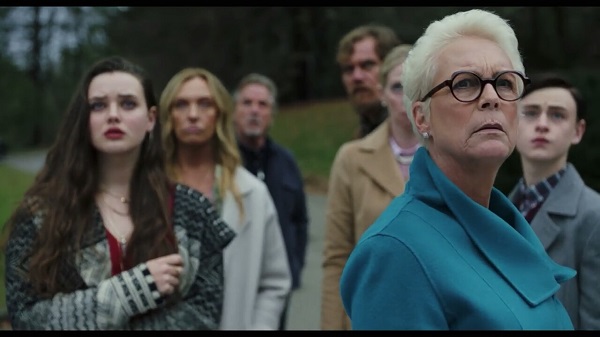 Director Rian Johnson (Looper, Star Wars: The Last Jedi) returns from a galaxy far far away to bring us the clever murder mystery, Knives Out.

The mystery surrounds the death of wealthy crime novelist Harlan Thrombey (Christopher Plummer) on his 85th birthday. Shortly after his death, Benoit Blanc (Daniel Craig) is brought in to investigate the circumstances surrounding Thrombey’s death. Was it a suicide or was it MURDER!?

In true whodunit fashion, there are twist and turns, some misdirection, and a few very hilarious reveals. Rian Johnson’s script has all the clever witty quips you’d expect in a comedy like this. The family shoots venomous darts at each other whenever the opportunity arises. He uses the talents of this ensemble cast very well. Each actor gets to play to one of their strengths and they’re given at least one moment to shine.

The whodunit angle of the story isn’t hard to figure out. If you’ve seen enough films, you can finger who the culprit is fairly easy. Figuring out who did it isn’t what gives the film its charm. Johnson doesn’t try to hide his hand, instead he trust the audience is smart enough to figure it out and enjoy the journey. He doesn’t surprise you by pulling a rabbit out of a hat, he shows you the rabbit. The fun is seeing how the magician hid a full sized rabbit hidden inside his top hat the entire time. That’s the brilliance of the story is not having audiences waste energy figuring out the puzzle but allow them to enjoy the journey.

In a film crowded with stars, Ana de Armas gives the best performance. People may recognize her from 2016’s boxing biopic Hands of Stone or in Blade Runner 2049. This is the most screen time she’s had and she makes the most out of it. The rest of the characters enter and exit the story at different points, Marta is one of the characters you get to spend an extended amount of time with. Hopefully this fantastic performance leads to Ana de Armas getting more lead roles.

Knives Out is a lot of fun and that’s the best part of the film. It’s an enjoyable 130 mins in the theater. Johnson’s script pulls you into this narrative puzzle full of mystery, ridiculous wealth, and intrigue. Everything about these characters is over-the-top. Part of the story is a hilarious commentary on wealth and privilege. Watching rich people cut each other off at the knees for something they feel “owed” is a goldmine for jokes.  Listening to Daniel Craig say, “I suspect….foul play” in a southern accent is funny all by itself. You mix those elements with Johnson’s unique ability for storytelling and you end up with one of the best movie going experiences of the year.

Knives Out is one of the best films of the year. The film embraces what it is without being too campy or too preachy. It’s deliberately cheesy and over-the-top story that dives headfirst into comedic tropes. Come for the hilarious commentary on the wealthy or come for Daniel Craig’s comedic take on Hercule Poirot. Either way, you’re going to leave having laughed and enjoyed yourself.