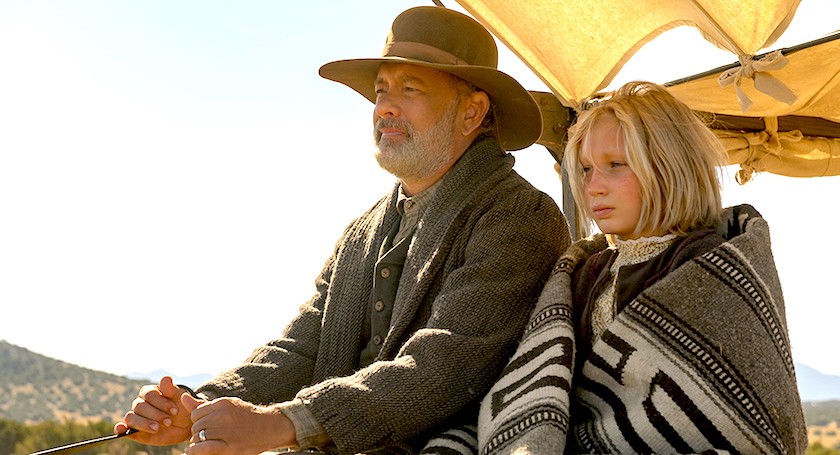 In 2013, director Paul Greengrass and Tom Hanks teamed up for the compelling drama, Captain Phillips. This year, they’re back together to tell the tale of man’s journey across Texas in News of the World.

Based on the 2016 novel by Paulette Jilles, News of the World is the story of Captain Kidd (Tom Hanks), a charismatic Civil War veteran that travels from town-to-town reading the news of the world. On his travels, Kidd finds a young girl named Johanna (Helena Zengel). Johanna doesn’t speak any English and is alone on the side of the road. Unable to find a home for the young girl, Kidd travels with her across the state of Texas to find her family.

Although the film is a mostly Kidd and Johanna on the road, the story is less about the journey from one destination to another and more about the unlikely bond between an old war veteran and a young child. The two have more in common than they realize. The heart of the story is watching the pair slowly grow closer through their shared grief.

Along the way, the two run into a bit of trouble – the kind of trouble that would around ruing the late 1800s. There’s a run in with a group of former Confederate soldiers that are looking to purchase the young girl. The situation forces the girl and Kidd to work together. The second encounter involves a run-in with a group of unsavory renegades that are led by a man named Farley (Thomas Francis Murphy).

Those run-ins are the two best sequences in the film and also a reminder of how dangerous traveling use to be. The unpredictability in those scenes injects some much needed action and tension in the film. The action doesn’t overshadow the story, it helps build on the bond between Kidd and Johanna.

Tom Hanks continues to be one of the best actors of our lifetime. He delivers another stellar performance as Captain Kidd. At times he’s the smartest man in the room, the toughest, and sometimes the most vulnerable. Hanks is one of the few living actors that can make all three aspects of Captain Kidd believable.

The young Helena Zengel matches Hanks energy in every scene. She’s both a semi-wild child and a stoic student that is learning from Kidd, even when he doesn’t realize it. If this performance is any indication of the type of actor Zengel is, we’ll be seeing a lot more of her very soon.

News of the World is a touching story. It’s one of survival, grief, and the power of companionship. It’s a simple story that’s elevated by wonderful performances from Hanks and Zengel. It succeeds at being a throwback to the Westerns that dominated the 1960s with updated set pieces. News of the World is the perfect charming drama to end 2020.