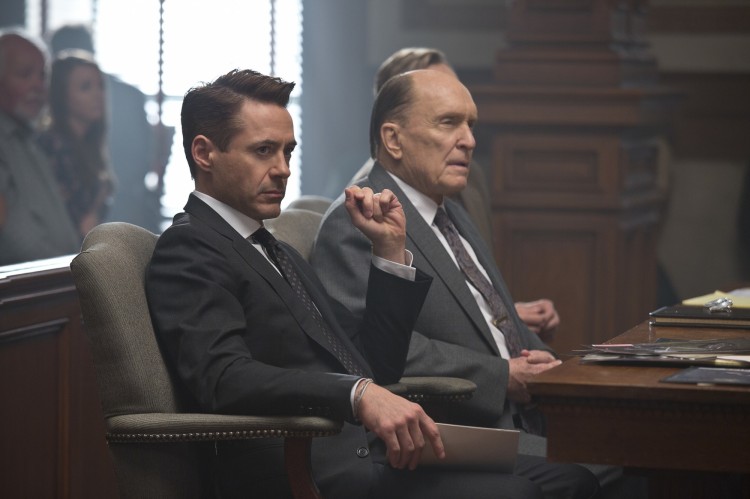 Robert Downey Jr. may have the most interesting career trajectory of any working actor in Hollywood not named Nicolas Cage. His career – once thought to be left for dead- received an adrenaline shot when he took the role of Tony Stark in 2008’s Iron Man. He didn’t just take on the role, he became Tony Stark, and the character that helped launch Marvel’s multi-billion dollar movie machine.

Downey’s new found stardom allows him the ability to play different characters. Although most of his time is locked up in different Marvel films/Sherlock Holmes movies, he’s still an A-lister with the ability to choose roles the way most people choose what to watch on Netflix.

So what movie does Downey decide to make between his blockbuster films:  A small courtroom drama about a father and son.

In The Judge, Downey plays Hank Palmer, a son who returns home to Indiana after the death of his mother. While home for her funeral he learns his father, Judge Joseph Palmer (Robert Duvall), is the suspect in the murder of a recently released prisoner.

The premise for The Judge is essentially an adaptation of The Prodigal’s Son parable with a little conflict sprinkled in – and there’s nothing more natural than the conflict between a father and son. The film plays on the Judge and Hank’s relationship, or lack thereof, while slowly peeling away the family history that fuels their fights.

As contrived as their relationship is, the two actors are juggernauts in every scene and absolutely nail two very good scenes – one takes place in the house when the reason for all their strife is revealed, and the other is a cross examination, although a highly improbable scenario in real life, it made for an epic courtroom scene with two phenomenal actors.

The biggest issue is The Judge makes us root for Hank Palmer. Why should we root for him? We are supposed to believe he’s a well paid defense attorney who is hired by rich scumbags to get them off of crimes they most likely committed. He’s the good guy? He’s not wrestling with any demons or trying to atone for any past sins, he’s just a jerk. One of the running jokes in the film is that he may have “made out” with own daughter, it’s revealed that his young daughter has never seen her grandfather (The Judge), his wife implies he doesn’t spend time with his daughter after he curses her out when she ask what she can do in the wake of his mother’s death.

The truth is Hank isn’t a real person. He’s an idea. He’s a boogeyman. He’s a construct of all the things we dislike about lawyers covered in a very likable Robert Downey Jr. Hank’s “character” is so well acted, it’s easy to miss just how impossible of a character he is. He sticks out like a sore thumb onscreen because the other characters in the movie are grounded in some reality.

Despite how terrible of a person Hank is, the story forces us to cheer for him as a hero because he’s the only one who can save the most endearing character in the film, Judge Joseph Palmer. Dwight Dickham (Billy Bob Thornton) is the prosecuting lawyer who just wants justice for a man’s death, yet he’s the “bad guy”. He’s the person we have to root against in trial because he wants justice.

The Judge is well acted by Downey, Duvall, and Thornton (who I wish had more scenes) and is a throwback to the courtroom dramas that flooded theaters in the late 90’s. Sadly, the film’s performances can’t save it from its unoriginality, and an unnecessarily long run time. After a blistering start, the film drags across the finish line 30 minutes after it should’ve ended. Hopefully next time we see Downey without the iron suit, he’ll give us more to cheer about.