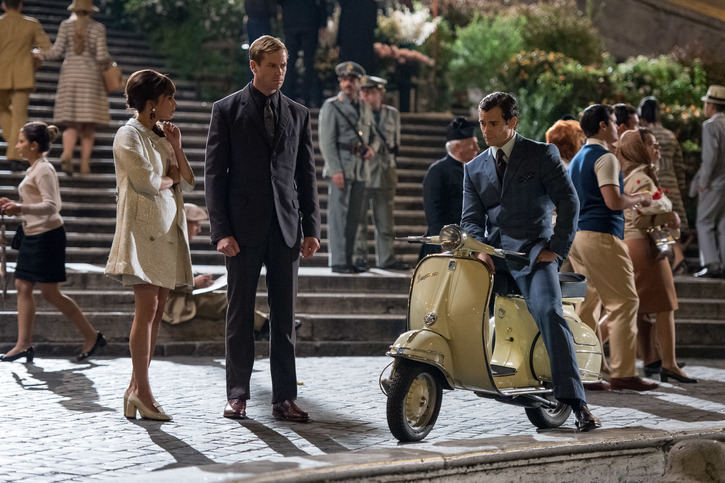 Like the show, U.N.C.L.E. is set in the 60’s and focuses on a two-man spy team = two men on different sides of the Cold War. The American is Solo aka “Cowboy” (Henry Cavill), a thief turned spy by the American government. Solo is a jack of all trades. He could be James Bond, a James Bond villain, or part of Danny Ocean’s crew. His Russian counterpart Illya aka “The Red Peril” (Armie Hammer) is a spy who was bred to be a soldier since the day he was born. And when provoked, he reacts like a great white shark when it sees fresh meat.

Despite their political differences, the two spies work together to stop Victoria Vinciguerra (Elizabeth Debicki) and her international criminal organization from creating an atom bomb. The duo gets help from Gaby Teller (Ex Machina’s Alicia Vikander), the daughter of a missing German scientist they believe is helping Victoria create her bomb. The three go undercover and try to infiltrate Victoria’s organization, find Gaby’s father, and stop an international disaster.

In a summer dominated by sequels and CGI, The Man from U.N.C.L.E sets itself apart by being as minimal and straight forward as the 60’s décor the film is draped in.

U.N.C.L.E is wildly entertaining from start to finish. Early on, the tone of the film is set with a humorous action scene between Cavill and Hammer in the streets of Berlin. Director Guy Ritchie was able to keep that tone for the entire film without sacrificing any of the action or espionage that makes spy movies fascinating.

Speaking of Cavill, his handsome Boy Scout appeal and charming demeanor made him a good choice for Solo. What made him perfect for the role was his humor and how well he acted alongside Elizabeth Debicki and Armie Hammer. Who knew he was so good with his comedic timing? He also made his character Solo interesting; from the slow deliberate way he spoke to the way he calmly took his time to do everything. It never feels like he’s playing a spy version of Superman.  If Cavill wasn’t locked into numerous Superman movies, I’d love to see him take a shot at 007 after Daniel Craig is done.

Armie Hammer’s performance as a robotic Russian spy felt dated, but Ritchie and company gave him a romantic angle and a severe temper problem to make him more interesting. There are a few hilarious scenes with Hammer, but the two that stood out are when Illya is told he has to get robbed and when Illya and Solo argue over what Gaby is going to wear while she’s undercover.

U.N.C.L.E has everything you want from a spy movie – car chases, fights, secrets, suits, gadgets (a great running gag in the film), and a mysterious shadow organization. What makes it unique is the 60’s look and feel that echoes through the movie. It feels like you’re watching an artsy spy movie that’s cool enough to take your nephew to and clean enough for your grandparents to watch. The language is almost as clean as the suits they’re wearing.

As fun as all the action is, it’s the scenes in between the action that make the film work. The great action is stitched together by some unexpected humor and wit. Everything is so well put together and polished, the film flows seamlessly for 116 minutes before anyone notices the runtime.

Moviegoers will rant and rave over Mission Impossible: Rogue Nation and pack theaters to see Spectre this fall, but The Man from U.N.C.L.E is a spy movie worth seeing. It’s well paced, well acted, interesting and has the “Guy Ritchie Reveal” that all his films have. Not to mention, the film is accompanied by a killer soundtrack that has the perfect 60’s vibe. I don’t know when will see another film as unique as this.  Ritchie unexpectedly gave us a special movie about special agents. I hope we get another one soon.