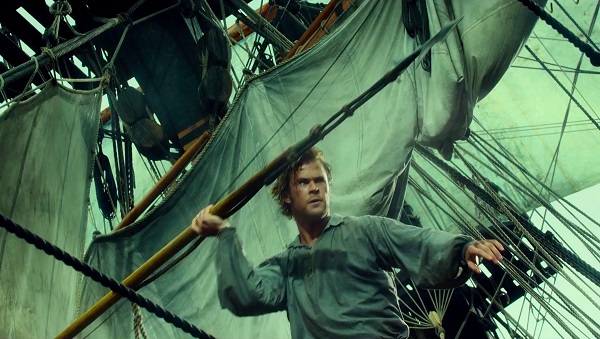 There are plenty of catchy boating phrases one could use to describe In the Heart of the Sea – high and dry, abandon ship, between wind and water, or capsized. The most accurate description would be “lost at sea”.

The film tells the tale of Moby Dick vs. The Essex through Tom Nickerson (Brendan Gleeson) an old man who was once a young cabin boy on the famous whaling ship. Nickerson reluctantly tells his story to an aspiring author named Herman Melville (played Ben Whishaw who is hard to recognize without his Bond gadgets).

Over a bottle and whiskey and much trepidation, Nickerson tells the secret of the Essex – a story that focuses on a Captain, the First Mate, and a whale. One man is Captain George Pollard, played by Abraham Lincoln: Vampire Hunter’s Benjamin Walker. He’s the entitled son of a Nantucket shipping family. The other man is First Mate Owen Chase. Although he has a name like a Fast & Furious villain, Chase was born into a farming family. Despite his roots, Chase was born to be seamen.

Chase, under the impression he’d earned his Captainship, learns the inexperienced Pollard will be the captain on his next voyage. This is what nepotism looked like in the 1820’s.

Naturally, the two men but heads before the ship sets sail in search of 2,000 barrels of whale oil. After a few unsuccessful months at sea, Pollard and Chase are told, by a one-armed captain, about a place far out into the ocean where there are whales as far as the eyes can see. They’re also warned about a monstrous whale that attacked the captain, took his arm and half his crew.

They believe the captain’s story is tall tale and decided to sail to the ends of the earth in search of this whale wellspring. There, they find the sea of whales they were looking for and also come face-to-face with the furious sperm whale they heard about.

The trailers show a lot of action and suspense at sea. Sadly, most of that action comes from one sequence in the film – Moby Dick’s first attack. A large portion of the film showcases people sitting in boats. Big boats, small boats, rescue boats and pieces of boats. The film doesn’t show much of what happens between Chase and Pollard. The first quarter of the movie sets up a huge feud but once the big fish shows up, the two solve their differences without saying a word. There’s not even the “You know, you’re alright” stare followed by a head nod.

What’s leftover, and the best part of the film, is Melville interviewing Nickerson about what actually happened on the boat. That’s right; the most interesting thing in a movie about a gigantic whale attack is two people talking in a dimly lit room. Nickerson and Melville’s conversations are the film’s most emotional moments, the most interesting, and  the only thing worth watching.

It’s not just because Gleeson and Whishaw are very talented actors, it’s because they’re the only characters the film demands you care about. Outside of Chase flipping around the ship to fix a sail (sorry Cloud Atlas did this scene better), Hemsworth spends most of his time staring out into the sea like a crazy and looking thirsty. To his credit, Hemsworth has a great I’m-hallucinating-or-possibly-dying face, it’s just not attached to anything else interesting that he’s doing.

The Moby Dick scenes should be breathtakingly suspenseful, but they’re not. It’s hard to care about an impending tragedy when you don’t care about the people facing the tragedy. The crew of the Essex should be one of the most compelling parts of this story. Instead they’re nameless/faceless people who either drown or starve to death.  The movie isn’t about those men. It isn’t about the whale either. It’s a movie about two interesting characters talking about the world’s most boring whale hunting crew and now they were stranded at sea after a whale attack.

If In the Heart of the Sea was edited into a short film starring Brendan Gleeson and Ben Whishaw talking about the voyage of the Essex, it would easily win the Academy Award for Best Short.

For a story that should be riveting, In the Heart of the Sea is as tedious lost at sea movie. It has its moments, but most of the film is about as exciting as an elevator ride. the movie is truly lost at sea the moment the ship leaves the dock.  It doesn’t do anything creatively with Moby Dick’s story that makes it worth a watch. There was hope that this could be Master and Commander meets Jaws, instead it’s another boring survival film.