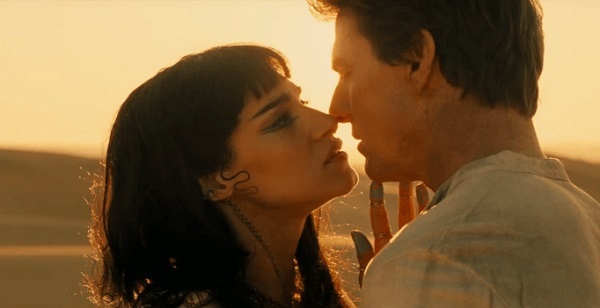 The first installment in Universal’s Dark Universe is a reboot of The Mummy. This version takes place in the present day with Tom Cruise starring as Nick, a soldier who steals antiques – he’s more of a thief than a soldier. After Nick purposely frees the tomb of Princess Ahmanet (Sofia Boutella), he’s cursed as “the chosen one” (sorry Lebron) and she’s free to wreck havoc on all of London with her mini mummies and giant sandstorms with faces.

Ahmanet is looking for a dagger with a red jewel so she can finish the human sacrifice she started before she was wrapped in Ace bandages and drowned in mercury. The dagger was split up in two pieces because blah blah blah. The whole magic dagger portion of the story is pointless because it doesn’t really care about that – more on that later.

Anyway, Nick teams up with Dr. Henry Jekyll (Russell Crowe) and his secretly society Prodigum (think S.H.I.E.L.D with less personality) to battle the supernatural Ahmanet and avoid being used as a vessel for the evil god Set.

Meanwhile, Nick’s dead friend Chris (Jake Johnson) keeps showing up to guide him along the way. It’s very American Werewolf in London, but it works.

Tom Cruise gives 100% and is all in as the film’s protagonist – it’s what he does best and why he’s Hollywood’s #1 action star. Sofia Boutella aka blade-y legs gives a convincing performance as The Mummy. Gender swapping the mummy was a very good idea. Ahmanet’s back story is interesting and believable. Sadly, both performance are sabotaged by a screenplay that’s more focused on creating a shared universe than actually telling a monster story.

The first two-thirds of The Mummy is an above average monster film with familiar tropes and good performances. It’s what audiences would expect from a mummy movie starring Tom Cruise. The last third of the film….where to start.

It’s bonkers to say the least. There’s a forced love story, an anticlimactic fight, and entirely too much exposition about Nick and where he fits in this monster universe. If what’s onscreen is unclear, Dr. Jekyll’s narration will explain everything. Seriously, the last battle is all about Nick and setting up future films. Marvel, and other studios that are good at this, save all that alley-ooping for the post credit scenes. No, not Universal. They’re going to sacrifice the ending of the first film in the series to set up something nobody is sure they can pull off.

Imagine the last fight in Iron Man was all about setting up the MCU and positioning Iron Man as the leader. It would’ve tanked the movie. Well, that’s exactly what happens.

The action is fine but not memorable. More importantly, it’s good enough to stop the movie from sinking.

The Mummy had a chance to be a fun action film; instead it goes completely off the rails. The ending is head scratching at best and leaves a lot to be desired. Tom Cruise will be the punching bag for why the film fails, but it’s not Tom’s fault. Sofia and Tom both are good and could’ve been great if the script allowed for it. It’s unclear what monster movie Universal has planned next. Hopefully they their lesson and finish the movie before they dive head first into world building.