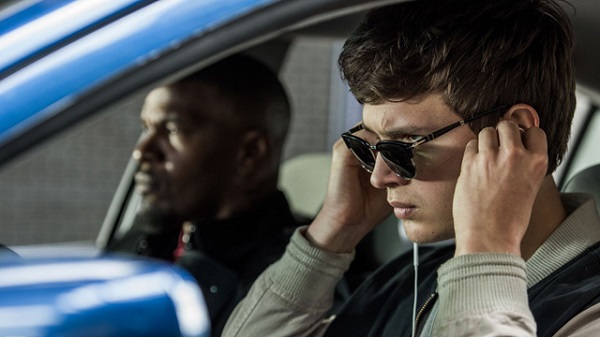 Heist movies have been a staple in Hollywood since 1955’s Rififi. Edgar Wright’s Baby Driver isn’t just a heist film; it’s a film that mixes different genres to create something audiences haven’t seen before.

Baby (The Fault in Our Stars’ Ansel Elgort) is a highly skilled getaway driver working to pay off his debt to a shady character only known as Doc (Kevin Spacey). After settling his debt, Baby wants out of the criminal life and he wants to spend time with Debora (Lilly James), a beautiful waitress he recently met. Of course, you’re never really out of that life. Baby reluctantly agrees to join Doc’s team for one more job before he can get away.

The plot reads like a normal synopsis for “Heist Movie X”. What sets Baby Driver apart is Edgar Wrights amazing cast and his brilliant use of music. If the cast for the film is 9 people, the music is easily the 10th cast member. From musical cues during shootouts to Baby and Debora’s slow dance conversation at the laundromat; the music is beautifully woven into the fabric of the film. Most films lay a score on top of what you’re seeing, this music feels like a part of the scene – like a supporting character that keeps popping up. The story flows like a musical without people singing their coffee orders or belting 3 minute songs about what to wear on a first date.

It’s rare you see music used so brilliantly in an action movie. Edgar Wright has unknowingly changed the way audiences will view music in film.

The cast is phenomenal with standout performances from Jamie Foxx and Jon Hamm. They play two different types of unhinged but skilled bank robbers. Foxx plays an over-the-top paranoid hothead named Bats while Hamm is a quiet bad boy named Buddy who is influenced by his much younger girlfriend Darling (Eiza Gonzalez). That crazy group of characters teamed up with an uncomfortably silent Baby makes for a very interesting team, and some hilarious conversations.

Ansel Elgort gives a great performance as Baby. For people who only know Elgort from The Fault in Our Stars and the Divergent series are in for a treat. This is easily his best performance. It’s unclear if Elgort will be the next Tom Cruise or the next Leonardo DiCaprio. He does have the chance to be the next Woody Harrelson – an actor who brings energy and confidence to the characters he plays and you’re always happy to see him pop up onscreen.

This genre bending heist film delivers on the action. The opening heist sequence is amazing and just of taste of what Edgar Wright and his crew deliver for the rest of the 117 minutes. The getaways aren’t Fast and Furious impossible but there is a suspension of disbelief necessary to truly enjoy some of the chase sequences and shootouts.

Baby Driver is fantastic twist on traditional heist films. It never takes itself too seriously, avoids normal heist movie clichés, somehow avoids being predictable, and leaves the audience wanting more. The genre mixing makes the film unique and its cast and script support Edgar Wright’s visions every step along the way. Maybe Wright not making Ant-Man was a blessing in disguise. We need forward thinking filmmakers to keep making original films like this – also, I’d be excited to see a Baby Driver sequel.