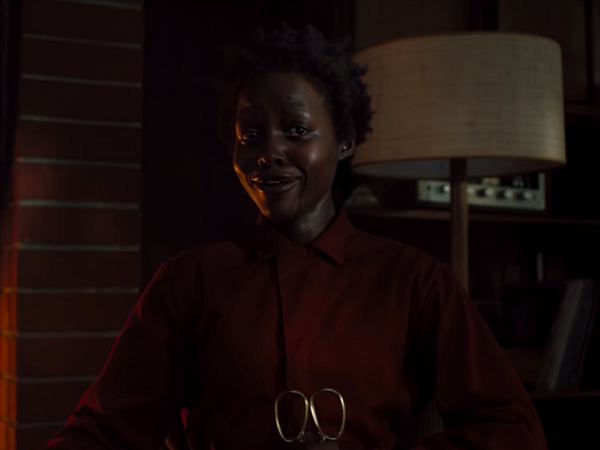 Like a true master of suspense, Jordan Peele turns a routine tale of terror into a suspenseful spiral of madness in latest movie, Us.

Dressed in red utilities suits and armed with gigantic gold scissors, the doppelgangers wreck havoc on the Wilson family.

Us is a straightforward horror movie that’s compelling, entertaining, and a lot of fun. At one point, the film is a violent home invasion story, then it pivots to a family on the run story, and then it feels like a post-apocalyptic survival story. It also has elements of Sarah Connor being relentlessly stalked by the Terminator. Jordan Peele beautifully blends these sub-genres together to make a fascinating horror film.

Nothing in Us is possible without Lupita’s electric performance. Lupita does most of the heavy-lifting playing Adelaide and her doppelganger. She gives one of the best performances in a horror film. Lupita has to be a terrified mother as Adelaide and a menacing villain as the doppelganger. What makes Lupita such a talent is her ability to knock both performances out the park.

Winston Duke is great as the nerdy dad who still thinks he’s cool. Duke’s comedic timing and ability to sell a joke is what makes him such a gem. As tense as the movie gets, Duke and Shahidi Wright Joseph provide moments of comedy to help bring everyone’s blood pressure down.

There are two fantastic home invasion sequences. The first one seen in the trailer feels very much like Panic Room or The Purge. The second sequence feels much more like Dawn of the Dead. The scenes are drastically different, one shot in light and the other in the dark, but they’re both shot so well and Peele uses wide shots and tight shots to show the audience the terror or hide his hand until the right time.

The love for horror that Peele has is what makes this film so engaging. Us is stuffed with tropes and sequences that horror fans are familiar with. What makes it work is Peele handling the genre with a level of maturity and him trusting the audience to put the pieces together.

A lot happens during the third act. There’s surprises, reveals, and one of the best hallway fight scenes – it’s a lot to digest. Us is the kind of movie you like a lot when you leave and love after you have a few days to think about it.

Us is as delightful as it is creepy. Lupita Nyong’o gives one of the best performances of the year and reminds everyone why she has Academy Award Winner attached to her name. Jordan Peele is 2 for 2 and delivers another masterful horror film that demands to be seen multiple times so fans can over-analyze and come up with their own theories.