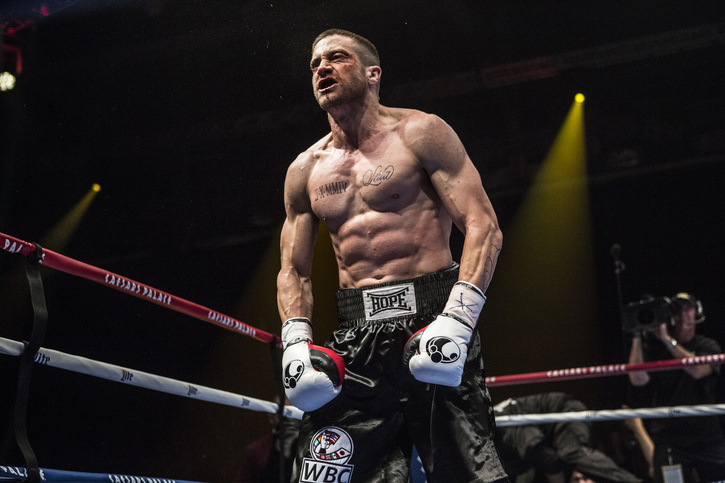 Southpaw is a classic case of a movie split into three parts – The Good, The Bad, and The Ugly.

Southpaw opens with Billy Hope (Gyllenhaal) winning another successful title defense while taking a massive beating in the process. During the post fight press conference, Hope is called out (Clubber Lang style) by hopeful title contender Miguel ‘Magic’ Escobar (The Strain’s Miguel Gomez). Hope and Miguel’s ongoing feud leads to a confrontation at a charity event where Hope’s wife (played by Rachel McAdams) is killed by a stray bullet.

After the loss of his wife, Hope quickly starts to unravel, leading to the loss of his home, a 1-year ban from boxing, and his daughter Leila (Oona Laurence) being placed in foster care. Down to his last dollar and unable to fight, Hope reaches out to a boxing coach Tick Willis (Forest Whitaker) to help him get his life back on track.

The first 1/3 of the film is really good.  It covers  a punch-drunk boxer becoming detached from his daughter as they both deal with the pain of losing Maureen (McAdams).  There are three very emotional sequences in those first 40+ minutes – 1) Maureen asking Billy to take time off from boxing. 2) Maureen’s death scene. Even with that scene in every trailer, it’s still very effective. It’s hard not to get choked up watching that sequence unfold.  3) Tick Willis repeatedly asking Hope what he did in references to his wife’s death.

The movies young star, Oona Laurence.  is fantastic as well. Actually, the whole cast is great and they have great harmony with each other.The scenes with Hope and his daughter are beautifully acted. Fuqua and his team put together some of the rawest emotional scenes I’ve seen all year,

The scenes referenced above are sandwiched between story lines that are impossible to care about.

Southpaw goes from an interesting character tale to a paint-by-numbers boxing movie – everything from Tick Willis’ character to Hope’s redemption title fight could’ve been scripted by anyone who’s seen a boxing movie before. Everything from Hope getting his title shot to the end of the film is as predictable as rain in Seattle.

There are a lot of issues the story raises, but Fuqua never makes an attempt to explore them. Southpaw is a much more interesting movie if it focuses on Hope’s physical ailments, Hope’s relationship with his promoter Jordan Mains (50 Cent), Hope dealing the guilt of his wife’s death, or even his relationship with his daughter. Instead, we get a boxer on a mission to win his belt back. Yep, we’ve seen this before.

We’ve seen sports movies focus on things other than the sport and be good. The Wrestler wasn’t about wrestling and Warrior wasn’t about MMA, yet both films had enough to fill your sports craving and also tell stories about the complicated individuals that play them.

I joked with Brian Zitzleman that there has to be 40 mins sitting on a cutting room floor somewhere. That’s the only thing that makes sense. There are too many things in the story that aren’t given resolutions. Miguel hiding the gun, a character’s death, and Rita Ora’s mysterious 15 seconds to name a few.

The final fight sequence is well choreographed but nobody wants to watch two non-boxers pretend to box for a 20 minutes. It looks good on screen, but how many up close boxing scenes do we need in one movie? When the story turned into an homage to Rocky movies, there’s no reason to drag the final fight sequence on that long. At that point, it became apparent Southpaw was done trying anything daring or new in its story.

It’s unclear if the movie should be 40 minutes longer to fully flush out the story or if it should revolve around three main characters and their relationships. I’m convinced one of these changes could make Southpaw a much better movie, maybe he movie it started out trying to be.

Southpaw is not a bad movie by any means. There are performances and scenes that make it worth watching. After Billy Hope gets buried by a tsunami of sadness, the story becomes conventional and uninteresting. Antoine Fuqua is a very talented director, but Southpaw’s issues stop it from being the masterpiece it had the potential to be.