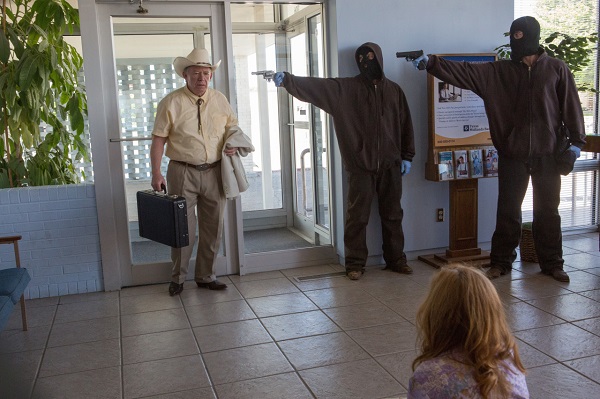 David Mackenzie’s Hell or High Water is the closest film to a modern western we’ve had in years.

The story opens with two brothers, Toby Howard (Chris Pine) and Tanner Howard (Ben Foster) committing a series of bank heist in West Texas. It’s clear during the opening moments – Toby is the calm brother, while Tanner is the unhinged one. As their bank robbing spree continues, it’s revealed they’re robbing banks to save their family’s farm from foreclosure.

There is little backstory given on the brothers other than Toby is divorced from his wife and has two boys and Tanner is an ex-con who shot and killed their abusive father.

On the boy’s heels are two Texas Rangers, Marcus (Jeff Bridges) and Alberto (Gil Birmingham). Marcus is a grizzly, offensive, hard-nosed ranger who’s an inch away from retirement. Alberto is the quiet partner and the butt of most of Marcus’ offensive jokes.

A game of cat-and-mouse starts with the Howard brothers up against the clock to get enough money before the foreclosure, and the rangers try to predict what bank they’ll hit next.

If there’s a list of actors who are good at playing unhinged, Ben Foster has to be at the top. Foster plays Tanner as a ticking time bomb who’s looking to speed up the timer so he can go off. Tanner is the kind of crazy you want on your side in a fight but aren’t sure if he’ll accidentally punching you in the face. Who’s better at playing crazy than Ben Foster? Michael Shannon? Michael Ealy? His performance is a reminder of how good of an actor he is, no matter what film he’s in.

This is Chris Pine is in a different role than most people are used to seeing him in. This is the most vulnerable character he’s played since 2012’s People Like Us.  As someone who’s known for his “pretty boy” persona, this is change of pace is exactly what he needed. Pine is a better actor than he gets credit for and playing Toby allowed him to showcase his skills. What Pine can do is on display during an amazing gas station scene where he shows he’s got a tough side as well.

Bridges is playing another gargled mouth old man and it’s exactly what this story needed. Who better to chase these bank robbers than an old veteran who’s seen it all before?

Like a true western, this story is about more than just guns and banks or cops vs. robbers. Through the characters and the story, they describe what’s happening in communities in and around West Texas. There are two very good scenes that give the movie depth. One scene involves a conversation between Marcus and Alberto where Alberto explains how his Native American family lost their land and how the same thing is happening now to the same people who stole their land. The second scene is Toby describing poverty as a disease and how it spreads through his family. These are two of my favorite scenes of 2016 and they’re both in the same movie.

That’s the beauty of this modern western tale; it’s about two brothers trying to create a better life for family. The story takes place in West Texas but it’s no different than The Wire when Omar points the gun at Marlo and tells him, “Money ain’t got no owners, only spenders.”, Bishop and his crew robbing Old Man Quiles store in Juice, or Cisco and his friends selling a bag of stolen molly to get out of Cleveland in The Land. It’s an American story as old as time – people doing illegal things for an opportunity to provide for their families because the system has failed them.

One or the funny reoccurring themes is the film is what happens when you try to rob banks in Texas and everyone has guns. It makes armed robberies problematic.  The other problematic thing is how brilliant the bank robbery plan was. It’s really well thought out and orchestrated. Toby’s plan may give people ideas.

Hell or High Water is one of the year’s best films. It’s a thrilling story with more heart than most heist films. Actually, calling it a Heist film sells it short. It’s much, much more than a film about bank heist. It’s a film about America strangling its citizens and the things they’re willing to do for air.