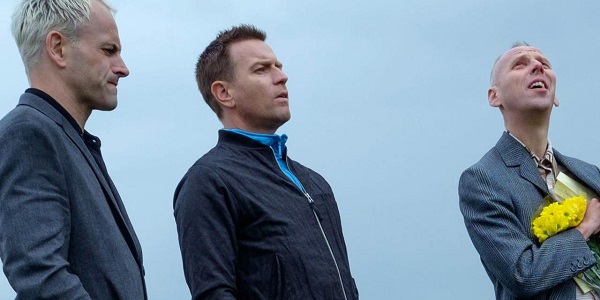 Renton’s return forces him to face Simon who is upset over what happened 20 years ago. After a big fight and semi-reconciliation, Simon hatches a plan to raise money to turn his pub into a brothel run by his girlfriend Veronika (Anjela Ndyalkova). At the same time, Begbie breaks out of prison and is looking to get back into his old life of crime.

T2 Trainspotting does a wonderful job giving all four main characters equal screen time. The most compelling of the four is Spud. His struggle with heroin addiction and his attempts to beat it are the best parts of the film. Like the other characters, the film opens with Spud in a terrible place, yet he’s the only character trying to be better and leave his old life behind. Ewen Bremmer’s performance adds pieces of humanity to a character that could easily be dismissed in a lesser film.

Ewan McGregor shines just as he did in Trainspotting. Much like the first film, Renton is a man who is lost and just trying to find his way. Except now he’s on this journey with 20 extra years of baggage attached to him. Renton aging without any real purpose is starting to weigh on him.

The sequence with Renton that takes place in the club is excellent. From the humor to the way the sequence is paced, it’s everything you’d expect from a Trainspotting sequel

The best part of the film is it being attached to the original film, but not being a rehash of the same story. A lot in their lives has changed, but a lot of it has remained the same. Director Danny Boyle gracefully ties the two stories together and builds a bridge that crosses 20 years.

Boyles command over the four characters is more important than any camera trick or witty dialogue in the film. T2 focuses on what made the first film so enjoyable – the characters. It’s a strong sequel that delivers everything fans of the first film will enjoy.

Now it’s time to get Danny Boyle working on a sequel for Sunshine.