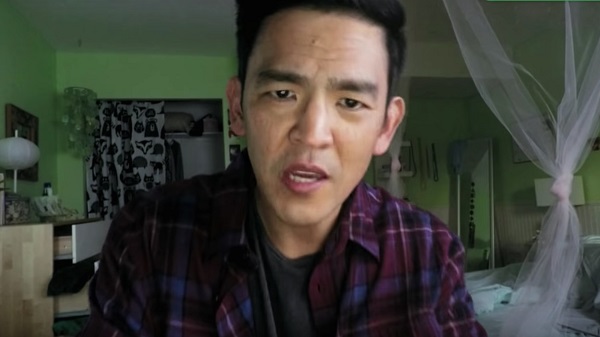 John Cho is known for his iconic roles in American Pie, Harold and Kumar, and Star Trek. In 2017, Cho starred in Columbus, a film critically acclaimed and praised by many. His performance in Columbus showed he could do a lot more than comedies, and he possessed the tools necessary to be a leading man.

Cho finally gets his  debut as a lead in Searching, a story about a man trying to find his missing daughter. Searching isn’t just any film. The footage Director Aneesh Chaganty uses is shown through various screens. Sometimes it’s cell phone footage, cell phone screens, or a laptop. Chaganty finds brilliant ways to use everything from text messages to Tumblr to tell this chilling story.

The story: David Kim’s (John Cho) 16-year old daughter goes missing one night. With the help of a local detective (played by Debra Messing), David collects as many clues as possible to help find his missing daughter.

There’s nothing flashy or dazzling about the story, it’s as straightforward as mystery can be. Two things make the film special. The first being John Cho’s performance. Most of the film is just Cho acting out a various range of emotions. He’s believable as an everyday-man doing everything in his power to find his missing child. He’s also believable a citizen in over his head, frantically swiping through social media looking for clues.

The second thing is how the mystery unfolds. The crafty way information is slowly feed to the audience is brilliant. The little digital breadcrumbs left for audiences to follow are even better. All of the clues, big and small, lead to a stunning ending that will have audiences on the edge of their seats.

Searching is the most innovative thriller in ages. There’s a strange, unexplained part of the story that hangs over the movie like a dark cloud until the big reveal.  It’s clever, fun, intense, and gripping from beginning to end. Chaganty gives a refreshing take on found footage style films. John Cho gives another brilliant performance. Hopefully this is the performance that gets him the recognition he deserves.