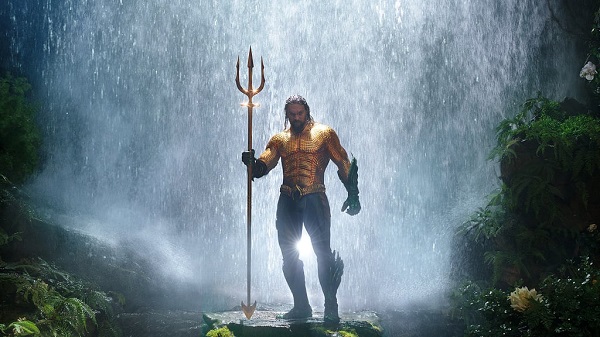 Director James Wan is known for his skills as a horror director (see: Insidious, Saw, The Conjuring). This time, he’s the man behind the camera for DC’s Aquaman. With the help of Jason Momoa, Wan attempts to turn a laughable superhero into a world saving badass.

Momoa stars as Arthur Curry aka Aquaman. After a visit from Mera (Amber Heard), Aquaman learns he’s the rightful heir to the throne of Atlantis. His brother Orm aka Ocean Master (Patrick Wilson) plans to use his power as king to declare war on the surface. Aquaman is the only person who can challenge Orm for the throne and stop the war. Aquaman and Mera set out on a quest to find the Trident of Atlan so Aquaman can claim his rightful place as king.

Aquaman is also being hunted by a pirate named Manta aka Black Manta (Yahya Abdul-Mateen II). Black Manta is a man on a mission and is willing to take down Aquaman by any means necessary.

Like most of the films in the DECU, Aquaman is a mixed bag – some good, some bad.

The good…James Wan does a great job allowing everyone to thrive in their roles. Momoa made a choice on how he would play Aquaman  and it works for this film. He’s great as the reluctant hero who just wants to drink beer and occasionally save people. His supporting cast gives good performances as well. Yahya Abdul-Mateen II is great villains that don’t get nearly enough screen time.

The costumes are incredible and are probably the best part of the movie. Aquaman looks great in the classic orange and green costume. Orm’s Ocean Master costume is great and the Black Manta design looks fantastic.  The costumes are a comic book/cartoon accurate as you can get. Even the suits Orm’s soldiers wear on the surface look really good.

The bad…the movie is a mess. Aquaman doesn’t feel like a story, it’s an overstuffed movie that plays like a bunch if interesting scenes that are loosely strung together by a thin narrative thread. The Black Manta scenes are great, but he’s gone for large chunks of the film. Orm has a very good reason to rage war with the surface, yet he’s turned into a typical power crazy king before the second act. Aquaman is a much better film if it has more interesting villain and focuses on  Orm’s gripes with the surface and how he’s not wrong. Instead, Orm is just Aquaman’s petulant brother who just wants to destroy things.

The final big underwater battle is a sea full of CGI animals incoherently flying around the screen. It’s hard to tell what’s happening and who is winning this battle.

The worst part is the Aquaman and Mera romantic adventure that’s wedged into the story. After leaping out of a plane in the Sahara, there’s a nice Romancing the Stone style adventure to find this lost city. Once they get to Italy (who knows how they got there), we are treated to a 5-7 minute romp through the market. Why is this scene in the movie? The scene feels so out of place, it takes you out of the movie.

Speaking of the Sahara, whoever thought having Pitbul remake Toto’s Africa deserves all of the coal for Christmas. ALL OF IT. Is there anything Pitbul will say no to?

When the movie isn’t Bachelor in Paradise: Atlantis, it’s bloated with bad dialogue and scenes that go on just a few beats too long. The film borrows from so many other movies; it never has time to create its own identity. It’s an adventure film at times. It’s a romantic comedy at other points. There’s a scene with Mera playing a flute on the edge of a boat. Why? And how would she know how to play a flute? Who has time for fluting when the world is about to end?

The hand-to-hand fights scenes aren’t bad. Wan gets a little too happy with the 360 camera during the fights and way too happy with slow motion. Sadly, there isn’t one memorable fight sequence. The best action scene is the rooftop chase in Italy and that’s sandwiched between Crazy Rich Atlantis and Mera’s flute recital. Just when Aquaman starts to get fun, it pulls you back down into the depths of nonsensical storytelling.

Aquaman is a mildly entertaining film that has frustratingly bad. Jason Momoa’s enjoyable performance as Aquaman is drowned out by bad dialogue and a sloppy story that attempts to replicate a handful of films without doing any of them well. It’s like Action Movies Greatest Hits but done by a cover band. Hopefully DC gets its act together so Wan and Momoa get another shot to give us a fun action adventure.