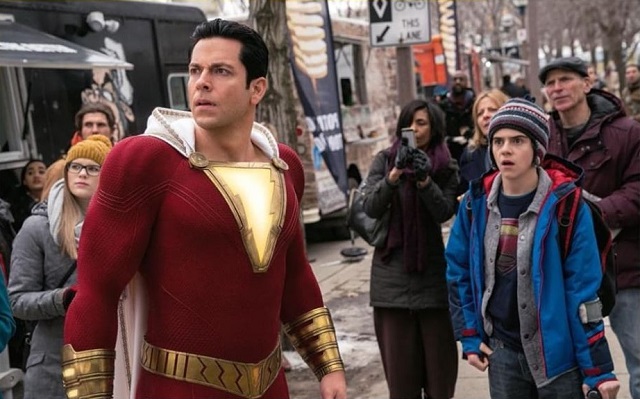 The history of DC’s live action movies has been a rollercoaster ride filled with more downs than ups. With the exception of a few films, their slate of movies have left fans frustrated and underwhelmed. While Marvel Studios is to release the final film of a 10 year story, DC is still struggling to find its footing after six films.

Enter Shazam! A character best described as Tom Hank’s character in Big mixed with Superman, plus a little magic sprinkled in.

The story follows a young foster kid named Billy Batson (Asher Angel). After a series of runaways, Billy is placed with a new foster family. Billy’s roommate is Freddie (Jack Dylan Grazer), a paraplegic with an unhealthy obsession for superheroes and comic books. After Billy saves Freddie from two bullies, he escapes on the subway only to be transported to the Rock of Eternity where he’s greeted by Wizard Shazam (played by Djimon Hounsou). The wizard gives Billy a crash course on Shazam and the responsibilities – the wizard is growing weak and the Seven Deadly Sins (seven evil statues that came to life) have already chosen their champion, Sivana (played by Mark Strong). The wizard goes on to say he’s been searching for centuries to find his new champion and Billy is the one. Just by saying his name, Shazam, Billy will turn into a superhero He’ll be blessed with Solomon’s wisdom, Hercules’ strength, Atlas’ stamina, Zeus’ power, Achilles’ courage, and Mercury’s speed.

All Billy has to do is say SHAZAM and he’ll be given those powers. Just like that, Billy is the superhero Shazam (played by Zachary Levi). As Shazam, Billy should be preparing fight Sivana, but he has no idea how any of this works.  Billy struggles with his new found powers,  and before he can get comfortable he’s confronted by Sivana and the Seven Deadly Sins. Sivana wants the power of Shazam and will do anything to get it.

Shazam! is a family friendly origin story. It’s a welcome departure from the darker/gritty DC films that preceded it. The center of the story isn’t Shazam and his caped crusading, it’s Billy and his desire to be part of a family. He spends a lot of the film searching for his mom or trying not to get close to his new family.

When Shazam! isn’t an ABC After School Special about the benefits of foster care, it spends time diving into what a teenage boy would do if he suddenly had superpowers. Billy is a flawed character and his moral compass doesn’t immediately point to fighting crime – his first thoughts are extremely juvenile. Zachary Levi is great as Shazam because of his ability to shine during the scenes when the adult hero is making adolescent choices.

As family friendly as the film is, Director David F Sandberg (Lights Out) uses the Seven Deadly Sins to play with some horror elements. The Sins are very dark and their presences is a little jarring at times, especially when they’re sandwiched between foster family fun and silly superhero jokes. Each creature has red eyes and a demonic voice that matches their eerie look. It’s as if creatures from The Conjuring accidental walked onto the Shazam! set and they kept the footage in the film. Despite the creatures feeling out of place at times,  I get what Sandberg is trying to convey with that imagery.

Asher Angel and Jack Dylan Grazer are really good. The two young actors spend the most their time onscreen together. That chemistry helps sell them as brothers and also as two strange teenage boys that wouldn’t automatically get along. Their frantic childlike energy is transferred to Zachary Levi when Shazam has scenes with Freddie.

Every good comic book movie needs a relentless villain and Mark Strong is perfect. Strong delivers another fantastic performance. His character is villainous when he needs to be and calm and measured whenever that’s necessary. Sivana’s villainous pursuits are comic-book crazy and motivated through pain like most literal and figurative comic book villains in film. The strength of Strong’s acting is his ability to take a cookie-cutter baddie like Sivana and make him not just unlikable, make him a great antagonist.

The superhero action in the film is pretty standard. If you’ve seen Superam, The Flash (tv), or any superhero film in the past decade, you’ve seen what Shazam can do. To be fair, the action scenes are fun to watch…we’ve seem them 100 times. This time it’s Zachary Levi in a red rubber suit doing all the cool stuff. The final showdown is the best sequence in the film. There are a few surprises and some laugh out loud moments.

It’s unclear is Shazam! is DC/WB correcting course, that remains to be seen. Like Man of Steel, Wonder Woman, and Aquaman, Shazam! is film that can stand on its own. The story embraces the juvenile turned superhero aspect of Shazam and turned him into a family friendly character. If they can successfully add The Rock as Black Adam, DC might have its next franchise.