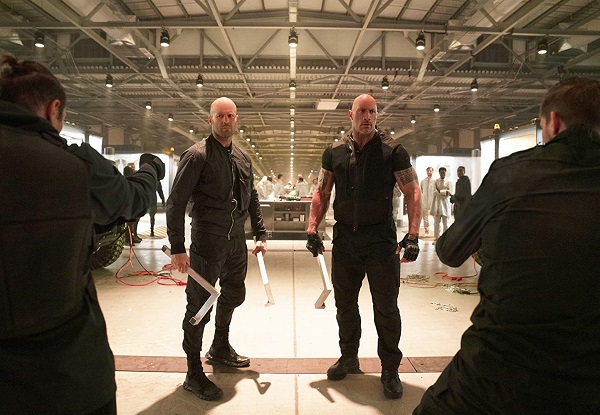 Fast & Furious Presents: Hobbs & Shaw is the first spin-0ff from the Fast and Furious franchise – a franchise that’s given us 1 emotional ending, 8 films, and 438,398 implausible moments.

Set some time after Fate of the Furious,  a crew of MI6 agents are attempting to extract a dangerous virus known as Snowflake. As soon as Hattie (Vanessa Kirby) thinks she has the virus in hand, she’s interrupted by Brixton (Idris Elba), a technologically advanced super soldier. The only way Hattie can keep Brixton away from the virus is to inject herself with it.

On the run and with only 72hrs to live before the virus kills her and the entire world, Hattie is being tracked by two of the best – Hobbs (Dwayne Johnson) and Shaw (Jason Statham). Once Hattie is in custody, the plot reveals three things: 1) Hattie is Shaw’s sister (Hobbs is a master tracker but somehow one of the intelligence mentions this) 2) Brixton is working for a shady organization named Eteon. They’re an evil group with endless resources. Instead of using these resources to help the world, they plan to kill off a huge chunk of the population with the Snowflake virus. 3) This movie is going to be all about family.

Hobbs, Shaw, and Hattie work together to get the virus out of her before it kills her and keep Brixton and Eteon from destroying the world.

Hobbs & Shaw isn’t breaking any new ground. It’s as big and bombastic as the trailers look. It’s a buffet featuring over a dozen action movies tropes. Some of my favorites include completely ignoring the laws of physics, someone injecting themselves with a deadly virus,  a group of top level mercenaries that can’t seem to hit anything, heroes don’t sleep or eat for 72 hrs, finding time to argue and/or make jokes when the fate of the world is at stake, being “wanted”  yet walking around the city without any disguises, and outrunning an explosion.

Not only is the movie stuffed with all of these tropes, it ramps up the insanity during each act and ends with an over-the-top finale that’s so ridiculous it’s impossible not to enjoy.

The three leads are what make this film work. Idris Elba is an amazing villain. He nails all the villainous monologues, evils stares, and disgusted look on his face when Hobbs & Shaw escape. Idris really nailed it and needs to play more villains.  Dwayne Johnson and Jason Statham have great chemistry together and the story does its best to showcase their chemistry every chance they get. They’re great as a hammer (Dwayne) and a scalpel (Jason) trying to solve the same problem, great when they’re side-by-side punching people it the face, and even better when they’re insulting each other.

There are two really great cameos that will make audiences laugh-out-loud. Their characters make no sense but that’s exactly what the Fast and Furious movies do. Adding new blood just for humor is what a ridiculous action franchise needs.

As enjoyable as it is, there aren’t any memorable action sequence, lines, or set pieces. The action is what you seen in the trailer. The only saving grace is Brixton’s transformer bike. Nothing creative happens onscreen, not to mention the runtime is a little too long.

Even with Hobbs & Shaw feeling like an 80’s buddy cop movie set in 2019, it’s a so much fun and wildly entertaining. This is the perfect addition to the Fast and Furious franchise. It’s absurd in all the right places and delivers what fans of these types of films are looking for. If you know what this movie is going in, it’s hard to not enjoy a film that’s unapologetic as this is.