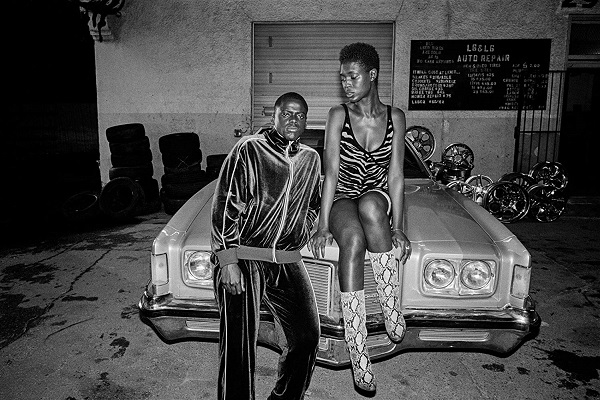 Queen & Slim opens with a couple on their very mediocre first date. When they’re unexpectedly pulled over by a cop for a minor traffic violation, the cop gets out of control and pulls a gun on Slim (Daniel Kaluuya). When the officer points the gun at Queen (Jodie Turner-Smith), Slim and the officer get onto a fight and Slim shoots the officer dead.

In a brief moment, they decided to make a run for it. When the dash cam video of the shooting goes viral, Queen and Slim become two of America’s Most Wanted. The shooing makes them a symbol for millions of people across the county. They decide to make a run to find freedom and they find an unexpected love story along the way.

The 2:21 theatrical trailer makes Queen & Slim look like a modern day Bonnie and Clyde story. Luckily, the film is much more than that. It’s a story about two outlaws running from a crime they’ve committed but it’s mainly about two people trying to find joy during the worst time in their life. It’s a story about the ability to find love when you don’t expect to see it.

One quick glance at Daniel Kaluuya’s IMDB and you’ll see he hasn’t missed. His resume includes groundbreaking TV shows (Black Mirror), award winning films (Get Out), and blockbusters (Black Panther). His role as Slim is the most vulnerable he’s been since The Fades. Slim isn’t a tough guy and he’s not a criminal. He’s a scared young man that just wants to go home and talk to his family. He joined Queen on this journey, yet he’s unsure what he’s doing.

In one of the earlier scenes, Queen and Slim stop to discuss what they’re going to do next. Slim says, “I just want to go home…and I want to see my family.” What makes Kaluuya such a brilliant actor is all of the emotion is in his eyes. The frustration, confusion, and realization of what he did come bursting out without him saying a single word.

Newcomer Jodie Turner-Smith is the other half of the dynamic duo. She is a revelation. She’s the rock of the duo. She’s the decision maker and the one some idea of what she thinks they should do. Like Slim, Queen is scared. What Kaluuya does with his eyes, Turner-Smith does with her facial expressions. She’s closed off and doesn’t let a lot of people in. Queen is a woman of few words, but when she does speak, she has something important to say.

The big scene stealer is Bokeem Woodbine as Uncle Earl. Woodbine is the most animated character in the film and delivers some much needed laughs. His intro is the first time audiences, and the characters, get a change to breathe and take in what’s happening.

Director Malina Matsoukas beautifully captures this story as it alternates between a road trip romance to fugitives on-the-run. Matsoukas, who previously worked on Master of None and Insecure, shines in her first feature film. Her use of color and light gives the film a vibrant look that helps the characters pop onscreen.

The biggest surprise is how connected you feel to the characters and how the story makes you feel invested their outcome. It’s as intense as the trailers show but surprisingly heartwarming and emotional – a lot more emotional than most people are prepared for.

Queen & Slim is one of the best films of the year. It’s a stylistic look at what would happen if you found love on the worst day of your life – if your life was changed forever one night and you were with the person you wanted to spend forever with. A police shooting is what gets the story going but the heart of Lena Waithe’s script is a love story between two strangers – the film never loses sight of that.