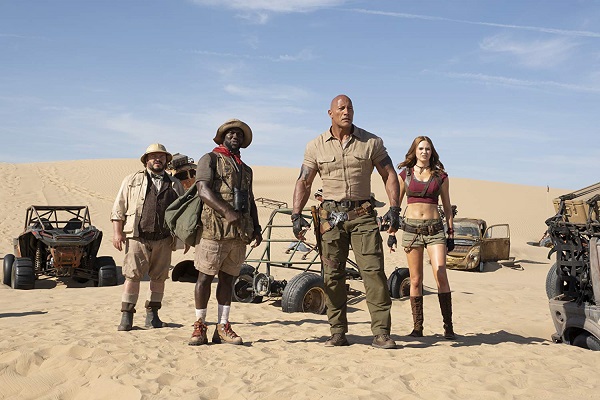 After the massive success of 2017’s Jumanji: Welcome to the Jungle, a sequel was inevitable. Dwayne Johnson, Kevin Hart, Karen Gillan, and Jack Black return as the ragtag group of video game avatars in Jumanji: The Next Level.

Sometime after the events of the first film, Spencer (Alex Wolff) is having a tough time adjusting to college life at NYU. During the Christmas break, Spencer goes to his basement and puts the pieces of the Jumanji video game back together. When Bethany (Madison Iseman), Martha (Morgan Turner), and Fridge (Ser’Darius Blain) go to visit Spencer, they realize he’s back in the game. The group enters the game to rescue Spencer only to find Spencer’s grandfather Eddie (Danny DeVito) and his friend Milo (Danny Glover) were accidentally sucked into the game as well.

There’s an avatar switcheroo and the group doesn’t end up in the avatars they had before. This switch makes it tougher challenge to survive the dangers inside Jumanji.

Thanks to Nigel Billingsley (Rhys Darby), the gang learns about their new quest to save Jumanji. They must steal a precious jewel from Jurgen the Brutal (Game of Thrones’ Rory McCann) before it’s too late. Similar to the first film, another bad guy has the jewel of something something that must be rescued. The group must complete this task while trying to find Spencer and rescue him from the game as well.

After the long set up, Jumanji gets right to the action and keeps it going until the final credits. The different worlds the group travels through feel like different levels on a video game. It’s an effective storytelling tool because A) It allows for some very interesting visuals. B) you can introduce different terrors associated with the new levels. They start in the jungle and work their way up to a mountain top battle with the final boss – every game ends with a final boss.  Along the way they face a series of challenges that include deadly creatures, moving bridges, and numerous nameless goons.

The real joy of Jumanji is watching actors mimicking other actors in the film. Kevin Hart give his best Danny Glover impersonation with long drawn out conversations and ridiculous old man arguments. Once again, Jack Black steals the show with his impersonations and physical comedy. At one point, there’s so much body switching, it feels like Imrpov: The Action Movie. It gets a little ridiculous but there are enough funny moments to make those long bits worth it. Once the movie ramps up to the final melee, it’s a little less body switching and more of a straightforward action comedy.

Underneath the comedy, Jumanji is telling a story about friendships and how much we value them. At times, it’s a little cheesy but it allows audiences to learn more about the characters outside the video game.

The film is lacking is more Jurgen the Brutal (you need a bad guy to drive the heroes) and more time spent on the levels to see the imaginative ways the game tries to kill the players.

Jumanji has no reason being as humorous and entertaining as it is. It’s an action comedy that understands what it is and every actor plays their part well. The action is decent but the comedy is what keeps the film focused when it starts to get too wacky. Kevin Hart and Jack Black carry a lot of the laughs, but Danny Devito as Grandpa Eddie is the real MVP. He steals a few scenes with his mumbling insults and witty one-liners. Stay for the post credit to see what may be in store for the next Jumanji movie.