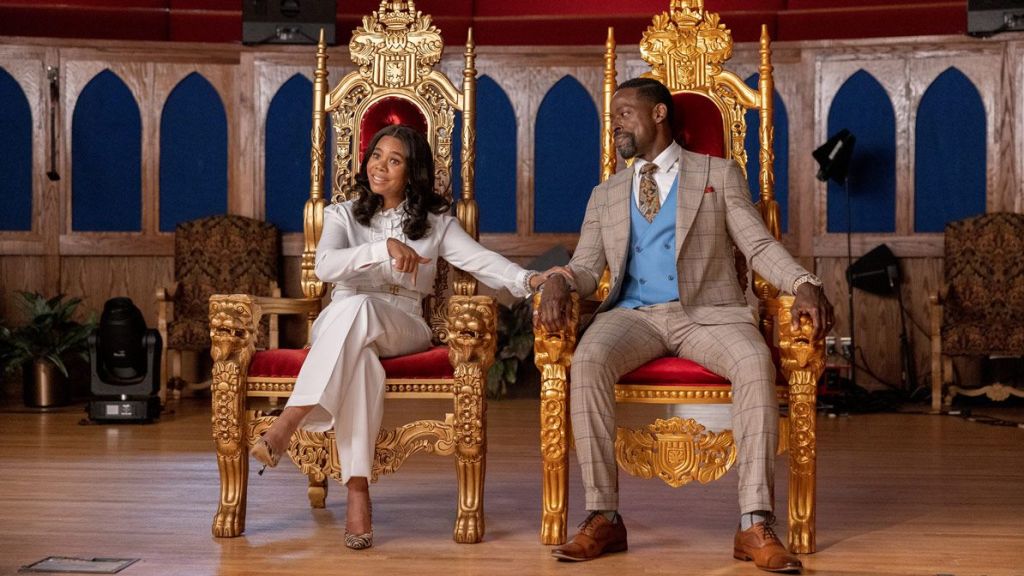 Honk for Jesus. Save Your Soul is a brilliant mockumentary that delivers a satirical look at a mega churches, pastors, and how churches deal with scandals.

Written and directed by Adamma Ebo, and adaptation of the short film, Honk for Jesus. Save your Soul follows Trinite Childs (Regina Hall) and her husband Lee-Curtis Childs (Sterling K Brown) in the wake of a scandal that forced their church to close.  They’ve hired a film crew to document the return ofWander to Greater Paths and their grand reopening on Easter Sunday.

Not only are the Childs’ working through a scandal, they have to contend with the Sumpters (played by Nicole Beharie and Conphidance), pastors of a new church that took in most of WTGP’s congregation when their church doors closed.

The clever set up allows for the film crew to go mostly unseen and unheard. When the audience is brought into the world, it’s through the lens of Trinite. The scandal is mentioned but the audience learns more about what happened as the film moves along. Most of the film is the crew following Trinite around as she tries her best to get Lee-Curtis and herself ready for the big day.

One brilliant choice director Ebo makes is breaking way from the mockumentary format to show the Childs’ when the cameras aren’t around. Those scenes are well done and give more insight into who they are, and more importantly, who they aren’t in front of the camera.

Most of the film falls on the shoulders of Regina Hall and Sterling K Brown. Hall continues to be one of Hollywood’s most versatile actors. As Trinite she’s tasked with being funny, vulnerable, angry, caring, and sometimes scared. It should be no surprise that Hall nails this role and delivers in every scene. She saves her best performance for the final 10 minutes of the film during the “Praise Mime” scene.

Lee-Curtis is such a wild character; it’s hard to imagine who could’ve embodied him better than Sterling K Brown. One moment he’s a confident slick talking pastor in a bright colored Prada suit. The next moment he’s someone lost trying to remember who he once was. Then he’s a narcissist searching to be loved and praised by the people. All of this is wrapped up in his identity as a pastor preaching God’s word to the people. There are scenes where Sterling K Brown says and does so much with his eyes. He’s the perfect lead for a mockumentary that’s packed with moments of awkward silence. Brown gives one of the best performances of his career and one of the best of 2022. He may likely be overlooked during award season but this is a performance people will be talking about.

Honk For Jesus. Save Your Soul isn’t all jokes and laughs. There are some genuine heartfelt moments as well as a few serious subjects discussed. The plot doesn’t fixate on the seriousness – they are scandals ripped right out of the headlines. Because of that, Ebo doesn’t hammer away at any of it but allows the audience connect the dots and come to their own conclusions.

Like most good comedies, Honk for Jesus. Save Your Soul is fresh story that’s well executed. It’s perfectly balanced by having Regina Hall ad the heart and soul of the film with Sterling K Brown as a polarizing pastor that will make you check your moral compass ask yourself, “What is forgiveness and who is it for?”