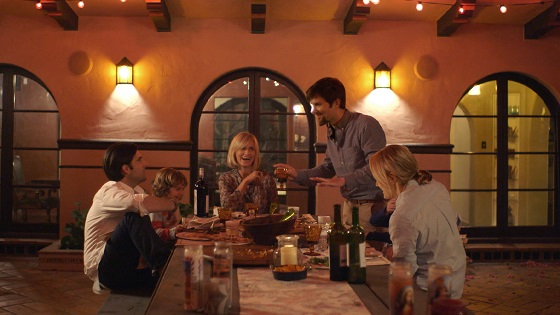 Shortly after Alex (Adam Scott) and Emily (Taylor Schilling) move from Seattle to Los Angeles, their son makes a new friend at the park. Through their son’s new friend, they’re introduced to his parents Kurt (Jason Schwartzman) and Charlotte (Judith Godreche). The brief interaction at the park leads to Kurt and Charlotte inviting Alex, Emily, and their son over for dinner.

After a night of pizza and partying, the two kids go to sleep leaving the adults to stay up to continue the evening’s festivities. As the late night turns into early morning, the drinking and dancing turn into questions about what Kurt and Charlotte’s real motivations are. They are tightrope walking a fine line between an all-embracing liberal couple and a pair of mysterious swingers. The more information is unveiled about both couples throughout the night, the more that line gets blurred.

R rated sex comedies are hard to pull off. Sometimes they’re messy copies of the great sex comedies of the 80’s. Sometimes the movie is more crass than comedy. But sometimes we get a movie like The Overnight that has just the right balance of story, comedy, and conflict to keep audiences entertained.

The chemistry between the four leads it the engine that keeps The Overnight on track. Taylor Schilling and Judith Godreche’s trip to the store captures all the moods of the film – it’s sexy, mysterious, funny, and informative. It’s a scene that could be gratuitous in a lesser movie, but here it actually helps drive the plot and the exploration of the characters.

Speaking of the leads, Adam Scott and Jason Schwartzman’s scenes together are as incredibly funny as they are incredibly weird. Scott continues to improve as a comedic/dramatic actor (see: Sleeping with Other People). Scott’s high energy is perfectly paired with Schwartzman’s laid back dry humor. The two don’t come out swinging with big jokes, but together they have a few knockout moments that will leave people in stitches.

The Overnight leans heavy on its R rating for some excellent gags and hilarious situational comedy. The “hard R” may rub some moviegoers the wrong way, but The Overnight is one of the best original comedies in years. Patrick Brice created unique situations to showcase how we poison our own relationships with unnecessary pressures and expectations. The film is as much of a conversation starter as it is a comedy – but trust me, you’ll want to go for the laughs.