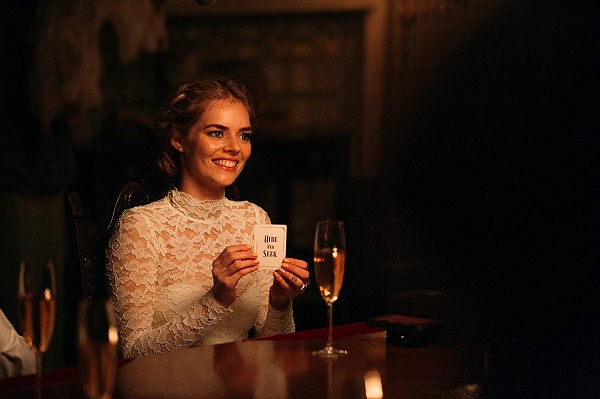 Over the next few months, there will be a few big horror movies landing in theaters, but nothing like Ready or Not – the Samara Weaving led story about a bride forced to play a game on her wedding night.

The story opens with Grace (Samara Weaving) minutes before she’s set to wed Alex (Mark O’Brien) and become part of the wealthy Le Domas family. After the ceremony, Grace is told before she officially can become a part of the family, they have to play a game before midnight. The game selected is hide-and-seek. The family counts to 100 as Grace looks for a place to hide and their goal is to find her before sunrise. When Grace realizes the Le Domas version of hide-and-seek involves her being hunted as part of a long-standing family ritual, she fights for survival and tries to escape the Le Domas home before sunrise.

The tone of Ready  or Not is very reminiscent of 2011’s horror hit, You’re Next. It’s funny but not a comedy, creepy but not too scary, and a whole lot of fun. While Erin (Sharni Vinson) is a badass with survivalist skills in You’re Next, Grace (Weaving) isn’t that kind of heroine. She’s equipped with a pair of converse, a bloody wedding gown, and her wits. She’s more of disruption to the Le Domas ritual than someone seeking revenge on the people trying to kill her.

Weaving gives a fantastically fun performance. It’s the perfect balance of badass and vulnerability that makes you cheer for Grace while also being afraid something terrible is waiting for her around the corner. Weaving’s best scene is Grace’s reaction to Alex telling her exactly what’s happening during the game and how she needs to leave.

The rest of the cast provide a few scares but mostly laughs. Most of those moments are courtesy of Nicky Guadagni as Aunt Helene. She’s so disgusted about how the night is going and doesn’t bite her tongue. Every moment she has is gold. They dynamic of the family is what makes this story so funny A bunch of wealthy people are trying to kill someone and they can’t seem to get it together.

Ready or Not is technically a horror film but Grace’s dangerous game of hide-and-seek isn’t necessarily scary. There are a few jump scares and tense moments, but most of her journey is packed with comedy and “I wonder how she’ll get out of this” moments. It’s the kind of film you show someone that doesn’t like scary movies but wants to watch something “scary”.

With a runtime of 90mins, Ready or Not gets right to the fun and games and doesn’t let up until the hilarious ending. The great casting and clever premise is enough to make Ready or Not a horror favorite for years to come.